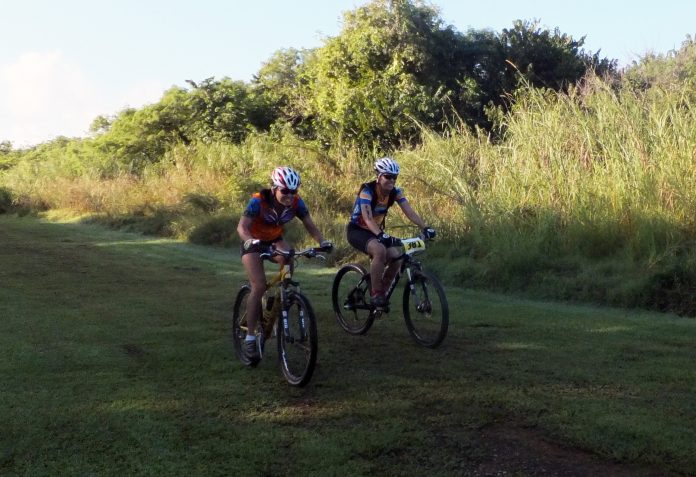 Guam – The Guam Triathlon Federation’s modified duathlon appealed to both the mountain biking and trail running athletes from around the island in a unique bike-run-bike competition early Sunday morning in and around the Two Lovers Point vicinity in Tamuning.

The 6-mile mountain biking trail had competitors navigating their way through dirt and road tracks in a three loop course before transitioning to a 2-mile trail run. After the run the participants jumped back on their mountain bikes for another three loops to complete the race.

“We were very happy with the turn out,” said Mark Cruz, Guam Triathlon Federation President – who also competed in the race, “I think the modified duathlon appealed to a lot of people and drew more participants.”

“There’s a good chance we could hold more of these type of events in this area, even in the coming months, as we don’t have another scheduled race until January,” Cruz said of the final race of the 2011 triathlon season.

The race started in a blaze of pedals as former Guam Olympic Cyclist Derek Horton and Pacific Games triathlete Peter Lombard took an early jump on the rest of the pack. Lombard would overtake Horton on the final lap of the first mountain biking leg and never look back, finishing in an unofficial 1 hour and 5 minutes.

Younger brother Gabe Lombard was in fourth place after the first mountain bike leg, but after a strong trail run he transitioned into the final 6-mile bike leg in second place, where he would finish the race with an unofficial time of 1:08.

Horton, a regular top finisher in Guam’s road and mountain biking races, would finish in third place after just catching Pacific Games triathlete Mark Walters on the final bike lap of the race.

“That’s my running quota for the year,” a tired Horton jokingly said after the race.

“I’m just glad I didn’t get lost,” Black said of the off-road routes.

Official times were not available as of press release. Final results and information on the 2012 Guam Triathlon Federation season will be posted at triathlonguam.com.