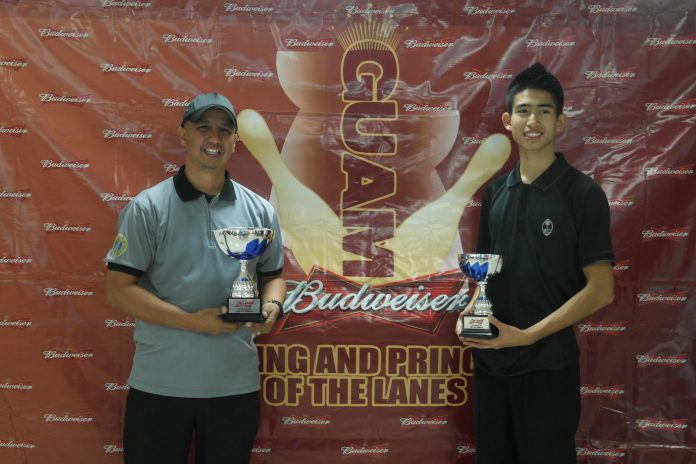 Tamuning, Guam– It was a pin ten nightmare for top seed JD Castro as all the adjustments he made to drop the pin went unanswered, in the process falling to second seed Ricky Duenas in the monthly finals of the Budweiser King of the Lanes.  Duenas earned the first back to back title of the year with a 225-194 victory defending his monthly title.

In the semi final round top seed JD Castro took advantage of 10th seed Tim Nauta’s inconsistency cruising to a  201-143 win.  Ricky Duenas broke out the whipping stick against 9th seed Greg Borja unleashing a barrage of strikes on his way to a comfortable 243 to 189 drubbing of the lower seed.

Castro led all King of the Lanes qualifiers with a 1275 six game total upending Duenas by two pins.  Duane Camacho finished in third place with a 1266 pinfalls followed by Brian Manibusan 1242, Jay Leon Guerrero 1218, Keith Guerrero 1214, Manny Tagle 1186, Howard Taylor 1143, Greg Brja 1138 and Tim Nauta’s 1123 rounded off the top ten who proceeded to the elimination round.

The monthly Budweiser Prince of the Lanes title saw defending champion Brandon Manibusan bow out to Paul Kaneshiro in the final round with a 186+26 to 121+38 lineage.

The top seeds in the Prince division experienced rough rides against the lower seeded opponents in the semi-final matches as No. 1 seed Jared Gutierrez fell victim to 6th seed  Kaneshiro  157+25 to 195+26 while No. 2 seed Manibusan found a way to escape an early deficit to slip past 4th seed Elmie Pronoble 198+38 to 184+32 to set up the finals match up.

The next Budweiser King and Prince of the Lanes will be held on Sunday, August 18, 2013 at 11:00 a.m. at the Central Lanes Bowling Center.