Guam – Senator Chris Duenas made an appeal for consideration of his “Bucks for Buses” Bill # 491 during today’s [Monday] legislative Session.

However, at the end of the vote on Bill 513,  as Duenas attempted to move for consideration of his measure, Speaker Won Pat graveled down saying he was out of order and she called the Session to a close.

Earlier. in a memo to Speaker Judi Won Pat and Rules Committee Chair Senator Rory Respicio, Duenas writes that the unexpected call to Session today [Monday] came as a “surprise” to him.

And while their maybe an “urgency” to discuss some other bills,  he maintains his measure should not be left out.

Bill #491 would reverse the salary increases Senators approved for themselves in late 2010, rolling their annual pay back to $55,308 from $60,840 now. That would save about $120-thousand annually which Duenas has proposed giving to DPW to help fund the struggling school bus program.

After some delay over Committee assignment, the measure got a public hearing in August before Speaker Won Pat’s Education Committee.

Senator Duenas argues that Bill #491 “provides the much needed revenue Department of Public Works (DPW) seeks to repair its existing fleet of deteriorating school buses. We all agree that the current fleet of buses poses a potential and immediate safety hazard for our school children who use the government of Guam’s school buses, and its in all our best interest to address this impact on DPW.”

Last week, Senator Duenas introduced a companion bill he dubbed the “Big Bucks for Buses” Bill #517. It has not yet received a public hearing.

Bill 517 would reduce the Legislature’s budget by $1-million dollars annually and re-direct the savings to the Department of  Public Works to help cover the cost of the ailing school bus program.

Guam – Senator Chris Duenas has introduced a measure to reduce the Legislative Budget by $1-million dollars annually and re-direct the savings to the Department of  Public Works to help cover the cost of the ailing school bus program.

The Senator has dubbed his measure the “Big Bucks for Buses Act” after an earlier measure he introduced, Bill #491, which was called “Bucks for Buses” and sought to roll back Senatorial Salaries to $55-thousand from $60-thousand now. Bill #491 had a public hearing but has not been reported out of committee for a floor vote.. 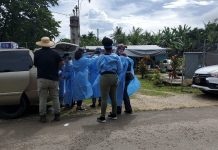