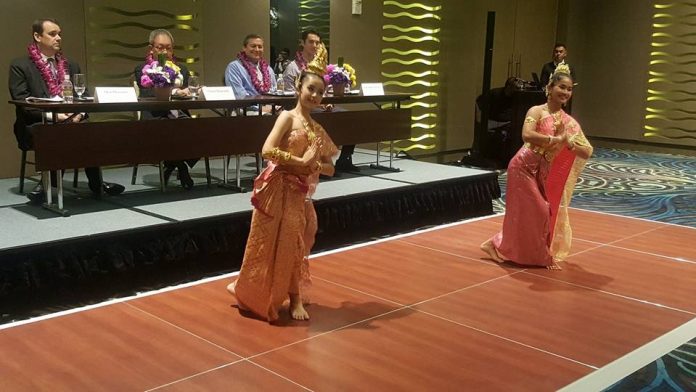 A team from tumon’s newest five-star luxury hotel was more than excited to show the island community their latest project, the Guam Convention Center, which they say is a game changer for tourism on island.

Guam – At the Dusit Thani Guam Resort, they’re celebrating the opening of the luxury hotel and the Guam Convention Center, which includes a grand ballroom that has an occupancy of 1000, a cellar, two smaller ballrooms, and “living room” style function rooms.

According to the Guam Visitors Bureau’s General Manager Nate Denight, the convention center is a game changer for tourism on island. He says, “Having them as part of Guam’s offering raising the image and quality of our Guam brand. We’re excited to be here for the opening of Guam’s first convention center. This added value to our destination will greatly enhance our ability to attract additional business travel, incentive groups and conferences.”
In fact, Guam Visitors Bureau General Manager Nate Denight says Guam will be hosting the Pacific Asia Travel Association at the convention center next year. General Manager of the five-star luxury hotel Dean Huntsman says today’s grand opening is a monumental occasion. He explains, “It’s not only here for the business market but for the community as well. We will work hard with GVB to bring MICE business to Guam. We will be having functions, weddings, and I’m sure there will be a lot of parties here over the years and this is just the beginning.”
Governor Eddie Calvo says this hotel not only boost tourism but local economy as well…”In short term, it was a $200-million dollar project that built a lot of jobs, construction workers, designers, and then there were 400 workers that those now have a job. It’s built our economy and strengthened our economy.”
Dusit International Managing Director and CEO Chanin Donavanik explains that he sees great potential for our island. He says, “The reason why we are here, the reason why they owner of this hotel spent so much money is because we believe that the future of Guam’s tourist industry is so good. We believe there will be a new market coming to Guam. We believe that Guam is part of America and is the closest to America from Asia it’s a great potential.”
The Dusit Thani Guam Resort is in Huntsman says the hotel is almost complete. The only project that’s still in the works is the construction of six villas, which ar