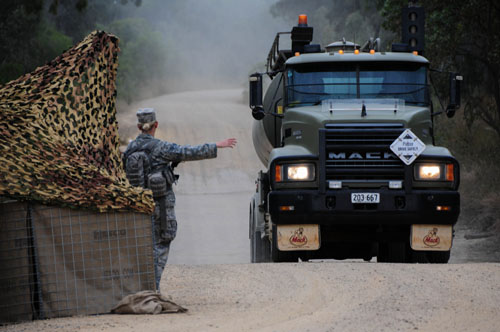 ANDERSEN AIR FORCE BASE, Guam –  [DVIDS] Airmen from the 36th Contingency Response Group returned Aug. 2 after participating in a two-week exercise in Australia.

The airmen, along with other American forces from U.S. Pacific Command, participated in the biennial Talisman Saber exercise with their Royal Australian Air Forces counterparts in the northern region of Australia.

The 36th CRG’s mission for the exercise included initial air base opening operations after a simulated seizure of an airfield from enemy forces to support the surge of more Coalition forces. They also forward deployed a team, enabling additional cargo movement operations in another play area in the country.

In addition to supporting the mission, the unit was also able to achieve several training milestones while exercising tactical skills to improve teamwork with joint service members and the Australians.

“Everyone did an extraordinary job and there was total integration under one command structure,” said Lt. Col. Bill Percival, 36th Mobility Response Squadron commander and 36th CRG mission commander for the exercise. “We fused together well with the Australians and our abilities to work together were impressive. It really set the tone for next year’s (Exercise) Cope North and other exchanges in the future.”

They prepared the staging area at RAAF Amberly, Australia, with communications, lodging and base support functions in order to receive the rest of their team.

An additional 50 airmen, who were part of the main body for the group’s team, departed Andersen AFB July 18 via a C-130 Hercules, but, in keeping with their unit philosophy as a contingency response organization, their unit’s footprint was only a small portion of the nearly 6,000 total forces participating in the exercise.

Contingency response units are specially tailored for each mission to ensure the smallest group possible can accomplish the mission. This often leads many functions that would require a large number of airmen at a traditional deployment location to be accomplished by a handful of airmen or fewer, said CRG officials.

The exercise officially concluded July 28, and most of the main body of the team along with their cargo returned to Andersen.

However, two members were added to the advance team to stay behind and share subject-matter expert exchanges in regards to security forces and civil engineering with their Australian counterparts.

“At the end, I stayed behind and helped the Australian engineers take down a DEMULSH, which is a Deployable Aircraft Maintenance and Logistics Support Hangar, where they put their helicopters during the exercise,” said 1st Lt. Rhonda Underwood, 36th CRG executive officer and the group’s lead engineer for the exercise. “It was worthwhile and I enjoyed helping them since they don’t get to experience taking them down that often. It went really well and we worked smoothly together because they work very similarly to the way we do.”

The next Talisman Saber exercise is slated for 2015.