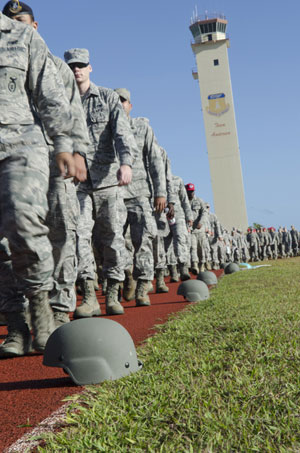 The day is an annual event in response to a mandate from Secretary of Defense Chuck Hagel for all military services to set aside time each year to remind service members and DOD civilians of their role in eliminating sexual assault and the steps to take to foster a zero-tolerance culture.

“Today we continued our conversation on ways to identify root causes as we work to eliminate sexual assault from our ranks,” said Brig. Gen. Steven Garland, 36th Wing commander.

Past down days have primarily focused on helping the victim. This time, leaders strived to expand the focus beyond supporting victims to identifying and targeting offenders.

[Airmen walk past helmets placed on the track during the 2014 Sexual Assault Prevention and Response Down-Day April 25, 2014, on Andersen Air Force Base, Guam. The helmets were a visual representation of individuals who have opened up reports since the implementation of the Sexual Assault Prevention and Response program at Andersen in 2006. (U.S. Air Force photo by Senior Airman Katrina M. Brisbin/Released)]

“It is important to know that this crime would not happen if it weren’t for the heinous behaviors that caused the people to be victimized,” said 1st Lt. Diana Wong, 36th Wing Sexual Assault Response coordinator. “This stand down brings light to the shadows and guise that offenders hide behind.”

In addition, the base recognized and honored sexual assault survivors with silent walks around the base track, where helmets had been placed on the ground to signify each member of Team Andersen who has been assaulted since the SAPR program started here in 2006.

“It was a visual representation of those who had the courage to open a report since the SAPR program was initiated,” said Wong. “The walk provided time for reflection, and also to acknowledge that there are many more that go unreported.”

Following the silent walk, units broke down into small groups and discussed the purpose of the day, the resources available for prevention and reporting, new plans and programs within the Air Force and steps everyone can take to stop a sexual assault from occurring.

One new process that has been implemented at Andersen is Relationships, Intervention, Strengthening and Empowering Talks. The sessions are mandatory for single females age 25 and below. Similar gender-specific talks will be held with males in the same demographic starting Fall 2014. As of now, the curriculum includes teaching about what are key components of healthy relationships, how to identify what behaviors are harmful or abusive and where they would go to find help, report, or to get out of the situation.

“As a reminder to our victims, we are ready to help,” Garland said. “Our Air Force’s newly-established Special Victims’ Council, our SARC team, and our Volunteer Victim Advocates are available.”

To contact the SARC or for more information on the SAPR program, call 366-SARC (7272), or visit the SAPR house on base at 1564 Marianas Boulevard.