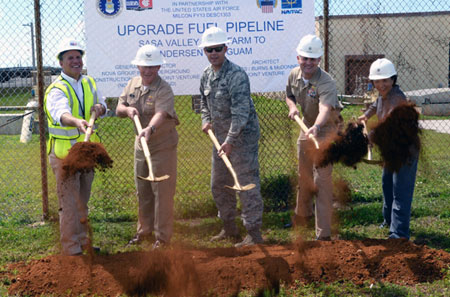 Project proposals, project approvals and other administrative hurdles took close to a decade worth of effort to come to this point, but the 1303 Guam Pipeline project has become a reality, said Navy Cmdr. Tony Giles, commander of DLA Energy Pacific at Guam.

The groundbreaking ceremony was the formal kickoff to the construction phase of the 15.7-mile pipeline that will cross the island, Giles said.

“After nearly a decade, this very important project has become a reality and will add significant capability to the island of Guam,” said Navy Capt. Chris Bower, DLA Energy Pacific commander.

“I appreciate all the hard work and effort from DLA, NAVFAC Marianas, and the contractors in support of our mission here at Anderson AFB,” added Air Force Brig. Gen. Steven Garland, 36th Wing commander.