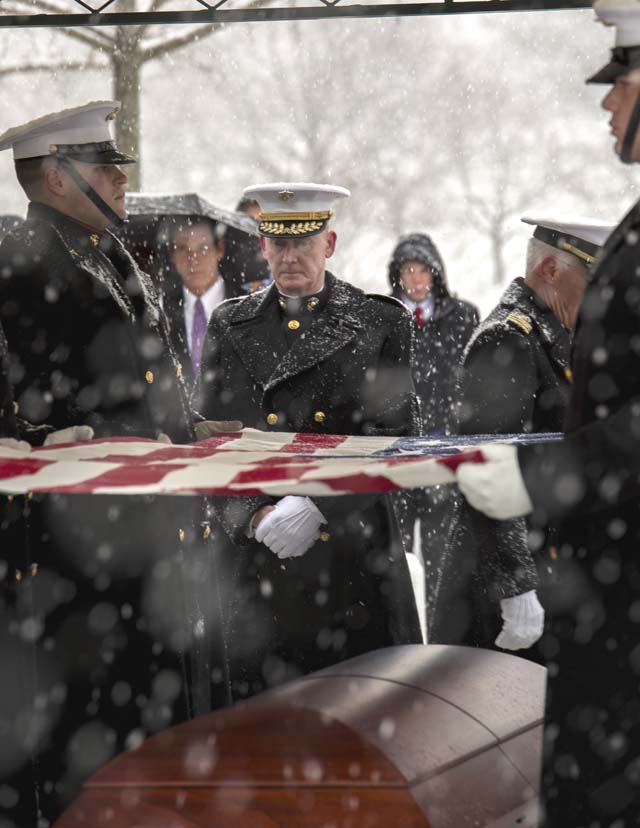 ARLINGTON, Va. – During World War II, Guam was occupied by the Japanese. It was the only U.S. territory to be under enemy occupation during the war.

In the harsh environment of occupation, many people learned to be brave. One man even went on to climb the ranks of one of the world’s finest fighting forces and serve in the U.S. House of Representatives.

On Feb. 25, Brig. Gen. Vincente T. Blaz, a long-time veteran of the Marine Corps, and native of Guam, was laid to rest at Arlington National Cemetery.

The full-honors ceremony was held at ANC with support from Marine Barracks Washington, D.C., personnel. Blaz’s family was in attendance.

Blaz was born in Guam in 1928 and was a teenager during the three-year Japanese occupation of the island before it was liberated by the U.S. Marines in 1944.

During the occupation, Blaz was forced to work for the Japanese.

In a February 1988 New York Times article, Blaz said he escaped the Japanese in 1944 by running away from the camp where he was being held. Blaz and two others were picked up by a squad from the 9th Marine Regiment.

He stayed with the Marines until the liberation of the island.

In 1947, he received a scholarship to the University of Notre Dame and graduated with a Bachelor of Science degree. He then went to officer candidate school and was commissioned in the Marine Corps in 1951.

In 1963, he earned a Master of Arts degree from George Washington University.

As a colonel, Blaz was the commanding officer of the 9th Marine Regiment, the same unit that liberated Guam in 1944. Later, he served with the Joint Chiefs of Staff in Washington, D.C. He was also the Marine Corps Deputy Chief of Staff for Reserve Affairs just before his retirement in 1980.

After serving in the Marine Corps for 29 years, Blaz was elected to the House of Representatives in 1984, representing Guam as its non-voting delegate.

During his time in the House he passionately sought to make Guam a commonwealth. He wanted residents of Guam to have the opportunity to vote on the federal level.

In an October 1991 New York Times letter to the editor, Blaz wrote that Guam was “equal in war, but unequal in peace.”

“Our casualties of war [in Guam] go far beyond those who have died in uniform,” wrote Blaz in his letter. “As the only American civilian population held by the enemy during WWII, the atrocities and daily humiliations of that time is burned forever into our psyches. Yet the loyalty and love my people feel for the United States remains unabated.”

Some of his personal awards include the Legion of Merit, Bronze Star Medal with a Combat “V”, Navy Commendation Medal (with gold star) and Vietnamese Cross of Gallantry.

He is survived by two brothers; a sister; two sons, Mike and Tom, and five grandchildren