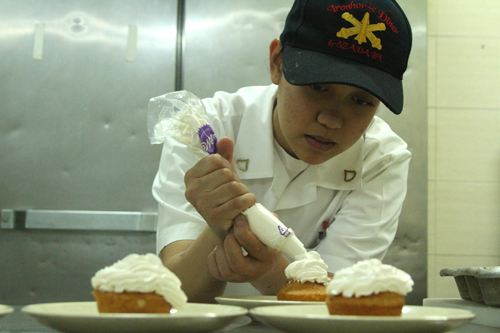 Pyeongtaek, South Korea – This is delicious.

“There is nothing better than hearing those three words,” said Pfc. Julie Ann Flores, a food service specialist from Guam assigned to 6-52 Air Defense Artillery “Iron Horse” Battalion on Suwon Air Base, Republic of Korea.

Having enlisted in the Army last year, Flores was not initially sold on her new job.

“At first I really hated it,” said Flores. “But the instructors taught me so many things about how to prepare a meal that it’s become something I truly love.”

Competitors from across the Department of Defense took part in the weeklong challenge that included awards for hot and cold dishes, multi-course meals, desserts and centerpiece display.

She earned a second bronze medal in the Student Chef of the Year category.

“The unit could not be more proud of her,” said Master Sgt. Christopher McMullen, the 35th ADA Brigade chief of food operations management. “But what really impressed me is what happened following the competition.”

The chief food operations sergeant of the Pentagon Mess asked Flores to consider working at the Pentagon Dining Room, he said.

“That offer is quite prestigious,” said McMullen. “It’s not afforded to everyone.”

Whether or not she ends up in Washington, D.C, Flores said the competition has inspired her to take her culinary skills to the next level and, once her military service has ended, she plans to become a pastry chef.