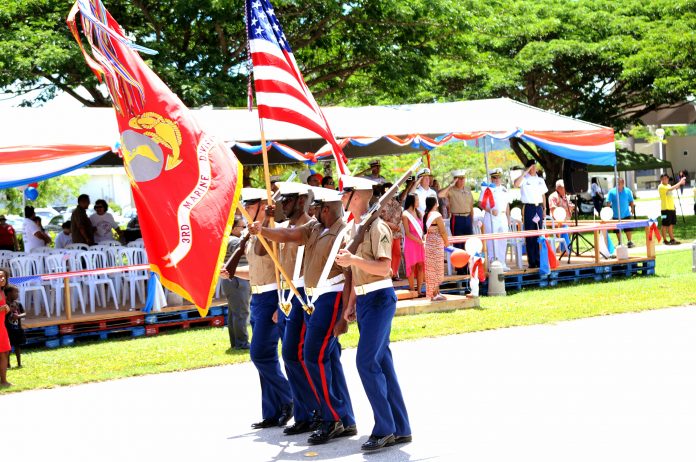 Nearly 400 people attended the parade and ceremony where six of the last few surviving U.S. and Japanese veterans gave speeches about their experiences 70 years ago.

With the liberation of Saipan from Japan, the U.S. commonwealth territory became a strategic stronghold for American forces in the Pacific region. The newly-liberated country helped to strengthen the American defenses and Saipan’s location proved to be vital to America’s offensive campaign during World War II.

Howard Johnson, who started his military career with the Merchant Marines before transferring into the Army, said he landed on the beaches of Saipan around 8 a.m. on June 15, 1944. He described the scene of the beach as utter chaos and his only thought was to survive.

[A Marine color guard presents the colors as the team passes the review stand during parade for the 70th anniversary of the Battle of Saipan, June 15. All branches of service were represented during the ceremony. The 70th anniversary may mark the last commemoration ceremony of the Saipan Battle due to the age and health of the World War II veterans. (U.S. Army photo by Staff Sgt. Kyle J. Richardson, USARPAC PAO)]

“There was no time to think about what I’ve gotten myself into,” said Johnson, now a 96-year-old World War II veteran. “Back then, we didn’t think twice about what we did. There were a handful of us that were drafted, but most of us were volunteers. There was a word we used back then and it was called patriotism. We loved America, so we wanted to defend and support it so we could stay a free nation. I was always proud to be a part of that. Nobody enjoys war, but we felt that we had the obligation to defend our nation. All the American men and women tried to do that during World War II.”

The commemoration ceremony for the Battle of Saipan is held every 10 years, however, Vicente Camacho, director of Veteran Affairs in Saipan, says this will possibly be the last ceremony held based on the age and condition of the surviving veterans.

“As Soldiers, as public servants, we should remember where we come from,” said Camacho. “As a 24-year Army veteran, I was brought up, if you don’t live through it, you don’t feel it. We only see photos and video clips from back then, we weren’t there, but it’s our duty to remember and honor their sacrifices for our nation.” 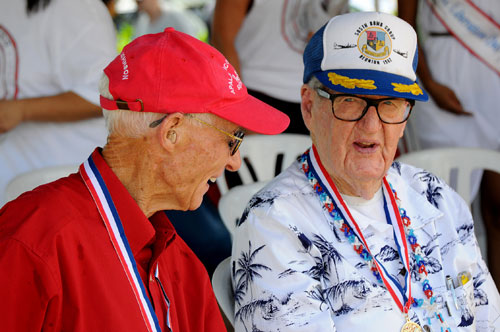 [ World War II veterans Howard Johnson (left) and Raymond Russell Kelly (right) hold a conversation at the end of a parade honoring the WWII veterans as a part of the 70th Anniversary of the Battle of Saipan, June 15. Johnson served as a Merchant Marine and a logistics special in the Army while Kelly was pilot. (U.S. Army photo by Staff Sgt. Kyle J. Richardson, USARPAC PAO)]

The ceremony holds a significance in the lives of the surviving veterans. Most of the surviving World War II veterans were in their teens when they arrived to Saipan. This is Johnson’s first trip back in 67 years, while Yoshio Ideguchi, an 88-year-old former Japanese sailor from Nasushiobara-Tochigi Prefecture, Japan, has made 30 trips to pay homage to the 36,000 fallen U.S. and Japanese warriors.

“The veterans were very young when they fought here in Saipan, so they have so many important memories of their times here. So it’s partly coming home for them,” said Jim superintended for the American Memorial Park.

While the 70th anniversary may possibly marks the last official ceremony, Camacho said that the veterans’ sacrifices and memories will continue to live through the peace and strengthening relationship fostered between the U.S. and Japan.