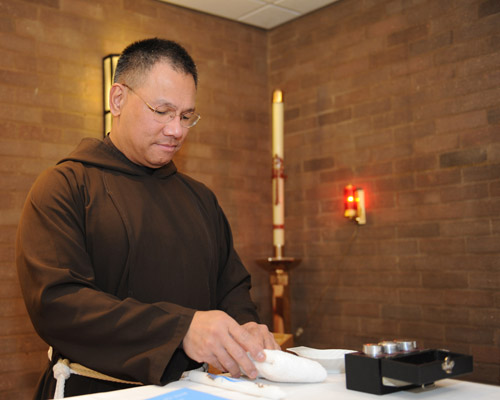 RAF MILDENHALL, England – [DVIDS] – People have all sorts of weekend habits. Some sleep in, some run errands, and others may take a stroll or a trip to the gym.

Whatever their usual pattern, many Team Mildenhall members don’t expect to find themselves doing a double take as they’re passed by a man wearing cappuccino-brown, monk-like robes and open-toe sandals in the dead of winter.

Several thoughts might whirl about trying to explain what just happened, but they simply caught a glimpse of U.S. Air Force Chaplain (Capt.) Michael Tenorio, who can often be seen on base wearing the robes of The Order of Capuchin Friars Minor — an order of friars in the Catholic Church.

Tenorio grew up in a Capuchin Catholic community, and the Guam native said seeing priests in robes was a normal occurrence for him.

“Ever since I was a boy, my community was Capuchin,” Tenorio said. “I never knew there was such a thing as a ‘priest’ — just Capuchin.”

Capuchins are among the chief offshoots of the Franciscan Order in the Catholic Church, following the life of St. Francis of Assisi, Tenorio said. Catholicism is comprised of several religious communities, many of which focus on the life of a saint, such as the Jesuits or Franciscans.

Before joining the military, Tenorio joined the order, abbreviated O.F.M.Cap., and oversaw a few parishes over a number of years. But in his heart he felt he was called to do something more than parish ministry. About that same time, he read an article by a bishop serving in the military about the work he had done in a deployed environment.

When Tenorio read the article, which stated the military was hurting for chaplains, he knew what his heart was asking him to do — become a desperately needed military chaplain.

After gaining his religious superior’s approval, the determined Tenorio set out to talk to a recruiter. Wearing his brown robes and sandals into the recruiters’ offices, and nearly 60 pounds overweight, he said many of the local recruiters either didn’t take him seriously or didn’t know what to do with him.

The priest, with his heart set on his goal, turned to recruiting websites for each service, but the Air Force responded within a matter of a few minutes. He connected with someone he could call, give specifics about his goals and who could give him guidance on how to obtain his commission.

As a chaplain, Tenorio stays focused on both the Air Force core values and his vows as a Capuchin. In uniform, he strives to embody the Air Force core values — Integrity First, Service Before Self and Excellence in All We Do. Out of uniform, he wears the plain brown robes of his order, with three knots tied in a rope around his waist representing his vows — poverty, chastity and obedience.

Though separated from traditional Capuchins, Tenorio said he feels at home anywhere there’s a Catholic community. To better connect with the Team Mildenhall community, Tenorio moved weekday Mass to earlier in the morning.

“I changed the schedule around because I like to start my day off with Mass before I go out to visit units. That way I can spend more time with units,” Tenorio said.

He makes every effort to involve himself with his units, said Staff Sgt. Joshua Hartvigsen, 100th Air Refueling Wing Chapel NCO in charge of readiness and training.

“He brings a love for the ministry, especially to those he serves in his parish, as well as to every airman on base,” Hartvigsen said. “They know who he is, and they know they can talk to him about anything.”

From a devout priest standing in a recruiter’s office with a calling in his heart, to the airman he is today, Father Tenorio came a long way to become a member of Team Mildenhall, but he never lost sight of his ultimate goal — to minister to the military.

“My primary goal is to live my life as a Capuchin — a religious priest,” Tenorio said. “The moment I lose focus on living as a Franciscan is when I should leave.”