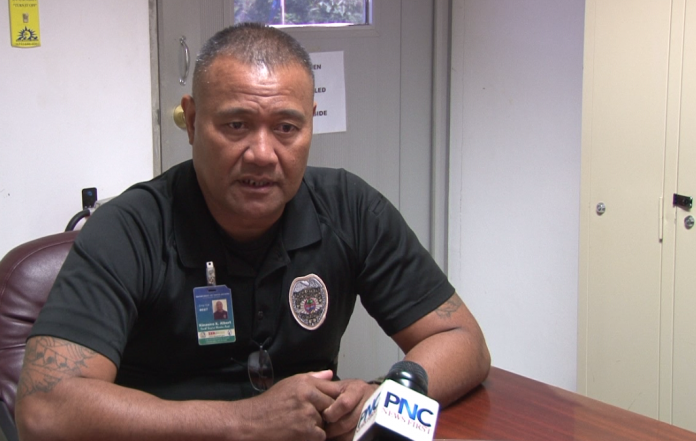 Guam – When you hear the Department of Youth Affairs making the news, it’s usually because a minor in their custody has just escaped. Keeping with the holiday spirit, we bring you an update on the department, showcasing a youth service worker and an administrator who go the extra-mile to make a positive impact on those remanded to their custody.

Youth Service Worker Kinesiro “KK” Albert stands out at DYA for the special skills and good attitude he brings to the job. It hasn’t always been smooth sailing for Officer Albert. Being a law-enforcement officer of Chuukese descent in a department that detains a population that is over 90% Micronesian, the decade-long employee had some tough times and even considered quitting. But with the advent of new leadership at DYA and the support of his superiors, Albert reconnected with his calling and learned to love his job.

“I choose this work because this is my dream,” Albert said. “I love to work with people. And most of all, I want to show my people that we can do the job, we can prove ourselves, that no matter what it is, we can just move on.”

PNC asked Albert how he feels being Micronesian and closely associated with those who are stigmatized for not always fitting in on Guam. We also asked him how he feels making a positive difference in the local Chuukese community and the community at large.

Albert said he felt it was his calling to be a role model for his community. “It just makes me feel different because I want to be the real model. I want them to know that they have to follow what it is. My last word to say to all my fellows, the citizens, please just follow the rules, stick with the rules, respect, that’s all that matters.”

“Supervising Officer Albert here has been wonderful,” Laguana said. “There’s a lot of things that we are unable to do. A lot of the parents of the clients that we deal here, the parents they barely understand or speak English. With Officer Albert, he’s always willing to come in and translate for us, he finds out more information.

“Our clients don’t know how to get ahold of their parents. Officer Albert is very well known in the community. He is able to make contact with the clients’ parents, have them attend court hearings, appointments — he’s a good asset to this department.”

According to Albert, minors at the department seem to be getting good grades. He suggested that behavioral and academic challenges may spring from the environments in their family homes. “I’m going to encourage the parents, for all these kids in here, to be more responsible, because I believe that’s the problem — the problem out there. These kids, they [are] very smart when they come in here. Especially in school, they have good grades, but in the outside, that’s where the problem is.”

Director Peter Alecxis Ada, has been conducting exit interviews with clients as they get released. These interviews are conducted with the parents, and everything is laid out on the table.

“In the exit interviews, everything is brought out in the open,” Ada said. “I added one other (question): if there is anybody that really stood out to you, to help you, you can talk to, to turn to? The clients did say, there is one, quite a few of them [say] KK Albert is one of them.

“I haven’t done it too many times but, sometimes I ask the officers to stay when they are being discharged. If they are here, I want these kids to go up to that person and say thank you. And it means a lot, it supersedes all payment that these officers have, just to hear it from that child. It means a lot.”

Sticking to the topic of exit interviews, we asked the outgoing director to tell us what would define his legacy at DYA. Ada said he has been able to successfully ensure that every child at DYA was able to go back to school. Secondly, Ada is happy to have started the process of replacing DYA’s dilapidated 42-year-old administrative building. The exiting administrator was able to secure federal funds to build a new facility and even added the new cottage homes to DYA’s campus. Construction on the admin building is ongoing.

Ada also ensured that all his staff got their overtime, hazard pay, and typhoon-pay, and that no monies are owed by the department for the next administration to sort out. Most importantly for Ada, it was always about showing the children that he cares and will stand up for them.

“I watch them everyday, we talk everyday, I sometimes join them for lunch, but I also sit in their court hearing[s]. Somebody asked me, ‘why do you do that?’ I said it makes them feel that somebody cares for them, and that’s what exactly my intent is.”