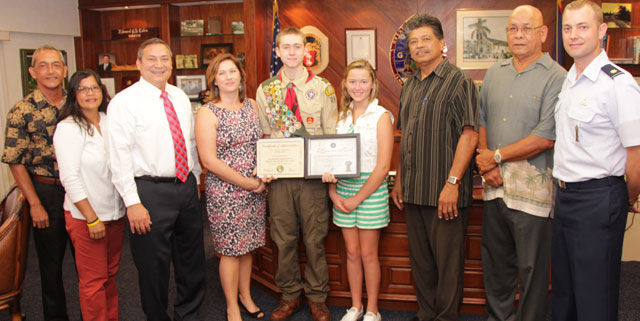 Umlauf is a Boy Scout in Troop 1420 who is working on becoming an Eagle Scout. And for his Eagle Scout project he took on the job of making visitor improvements to the Chagui’an massacre site in Yigo.

45 chamorro men lost their lives at Chagui’an, just as the island was being liberated during World War II.

With the help of fellow scouts, family and friends, as well as private donors, Umlauf organized the installation of a memorial stone with an inscription and added two concrete benches, along with getting signs installed to help guide visitors to the site.

Umlauf is the son of Air Force Major Kurt Umlauf who serves in the munitions squadron at Andersen Air Force Base.

On August 8th, at 10am, a mass will be celebrated by Archbishop Anthony Apuron at the massacre site.

The general public is invited to join the the Chagui’an Memorial Mass celebration.