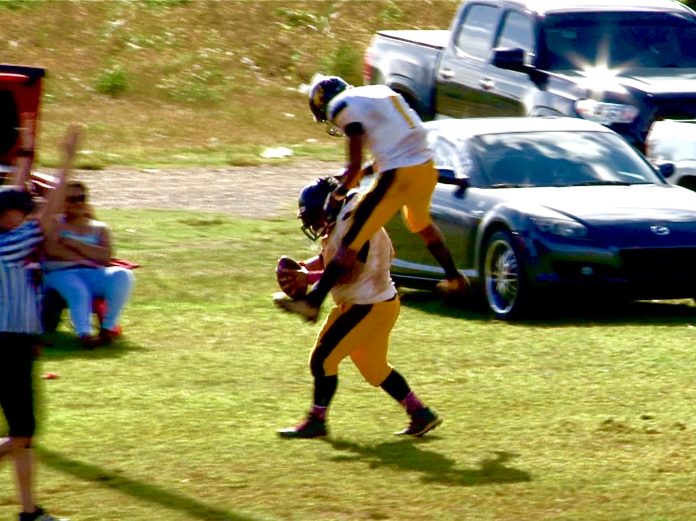 The Island Eagles looking to get their 2nd win in a row, but they’d have to get through the Island Chiefs.

TIYAN – The Budweiser Football League played on with week 9 action. A rematch from December 6th, Chiefs. Eagles. Last time these two met it was the Eagles who took it 10-0. Chiefs try to score early, but Jade Shimizu throws an interception to Eagle Joe Terlaje. Terlaje has a nice return before making a dangerous pitch. Ball is loose! Luckily, the Eagles recover and are tackled in Chiefs territory. An illegal block in the back gives the Eagles the ball on the 2 and they are able to punch it in off a fullback dive. Eagles on the board first. A physical game from both teams, this one actually went into double overtime. Chiefs, finally find the end zone with a Tom Meddler run, off a big block from Candy Taman. Taman had a good game, stuffing the Eagles last play in the 1st overtime, but it’s the Eagles who score when it counts and hold off the Chiefs to take the win. 14-8 the final from Tiyan. Eagles will see action against Hal’s Angels next week in what will be the last regular season game. The Island Chiefs have a bye.