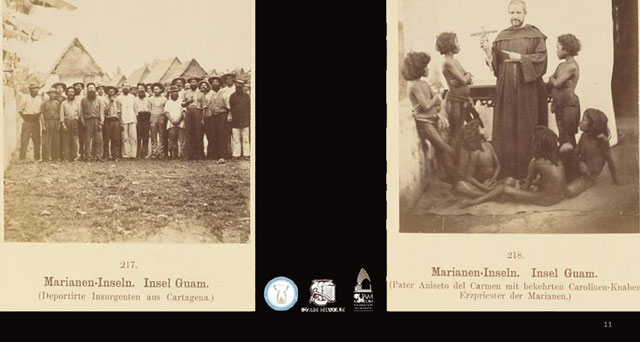 Guam –  The Department of Chamorro Affairs, the Guam Museum, and the Guam Museum Foundation invite the public to take a “virtual tour” of Guam’s historic, capital city of Hagåtña, in commemoration of International Museum Day.

Tying in this year’s theme of “Museum Collections Make Connections”, perhaps the earliest known photographs of Guam, are now available for viewing in the Guam Museum Facebook Page.  The images connect us to a time, once described only through writings, illustrations and oral history, but now through photographs taken by a German expedition in Asia and the Pacific.

* A permanent exhibit of the “Riemer” photographs are on display at Guam’s 1st Lady’s Museum at Government House.  Please call 671-475-9474 for visits.

Here is a description of the photographs by Dr. Christina DeLisle and her Museum Studies Class at the University of Guam:

These photographs of Guam’s capital city of Hagåtna are attributed to Gustav Riemer.  Riemer was Paymaster of the SMS Hertha, a German man-of-war that traveled to Asia and the Pacific from October 1874 through July 1877 and whose visit to Guam was most likely part of a German colonial mission in the region.  The expedition was one of many European and American ventures, scientific and commercial, which followed a longer history of imperial powers carving up the world, and Spanish colonialism and missionization in the Marianas.  German encroachment, in particular, spurred Spain to reinvigorate its presence in Micronesia and to strengthen its political claims to the region.

First publicly exhibited in Berlin as a wunderkammer (“wonder room”) or “cabinet of curiosities,” these photographs may speak more about foreign desires to capture exotic and faraway lands and to stage “picturesque” and “tranquil” images stereotypically associated with the tropics and distant outposts, rather than accurately depict quotidian life on Guam.  For example, when the Hertha arrived in 1876, a recent influx of several hundred Spanish deportados had already exacerbated the living conditions and challenges that the people faced as a result of typhoons, flooding, drought, diseases, and food rationing by the Spanish government.  One would not know this by simply looking at the photographs.

One would also not know that the deportados – who Spanish officials exiled to Guam because some believed remote beaches had ‘moral virtues that regenerated the culprit who set foot on them’ – were rationed rice and pork while others received only a small portion of rice daily.

From the images and imagery (i.e. “bucolic” landscapes, “docile” natives, “quaint” others), one may not sense the long history of Chamorro resistance that occurred alongside local and nativist struggles in the Americas, Mexico, and the Philippines – movements that also challenged Spanish rule.  Upon closer inspection, one may not even surmise a history of Chamorro survivance (survival and resistance).  Indeed, these early images of Guam do not simply afford a ‘window into the past’; rather, they provide an opportunity to reclaim stories of Chamorro landscapes and the multiple narratives of “native” and “other.”

“Guam’s rich 4,000 year historic past continues to unveil marvels of stories untold of its peoples, the Chamorros.  We celebrate along with all other museums… the significant contributions that communities provide in advancing Museology worldwide.” – Joseph Flores Artero-Cameron, President of Guam’s Department of Chamorro Affairs, and President of the Pacific Islands Museum Association

A permanent exhibit of the “Riemer” photographs are on display at Guam’s 1st Lady’s Museum at Government House.  Please call 671-475-9474 for visits.

For more information on the “virtual tour”, please contact Mr. Simeon Palomo, Director-Designee of the Guam Museum, at 671-475-4230 or simeon.palomo@dca.guam.gov