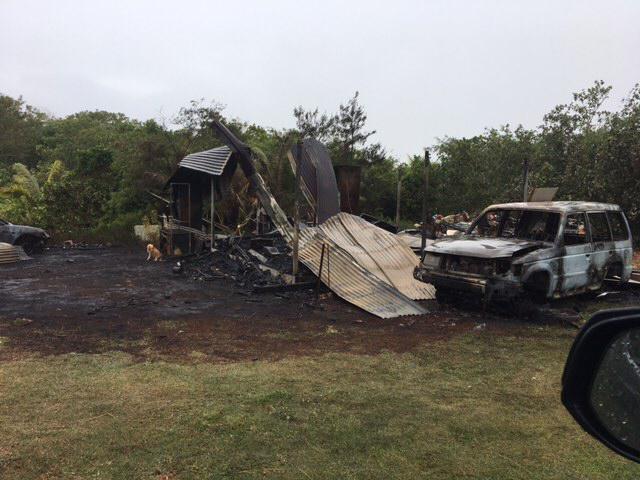 A Dededo man is living in a tent after a fire ripped through his house early this morning.

Guam firefighters were at the scene of the overnight blaze on Chalan Ibang.

The resident of that home, a 48-year-old man, declined to be interviewed on camera.

He told PNC that he and his girlfriend were coming home when they found the house and two vehicles in the yard on fire.

He called 911 at around 3:15 a.m. and fire crews rushed to the scene. They extinguished the blaze by around 3:40 this morning. No one was injured.

The home was on the victim’s grandmother’s Chamorro Land Trust land. He said he’ll live in a tent on that property until he figures out what’s next.

The house was made of wood and had a tin roof.

According to Dededo Mayor Melissa Savares, it was due for a rebuild.

“His grandmother did tell me that just last night, she was discussing the replacement of a structure on the property because the house was built in the 1990s. So you know, wood that dry, even if it was treated, doesn’t last very long. So thank God that he was able to get out in time,” the mayor said.

All of the man’s belongings were destroyed in the fire. Mayor Savares got in touch with the Red Cross which provided the tent.

The cause of the blaze is still under investigation.