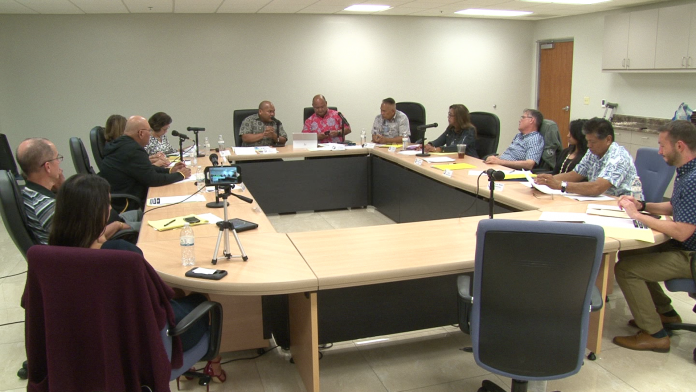 Guam – With millions of dollars less in their budget next fiscal year, the Guam Department of Education has a tough task ahead in running a smooth school year without compromising the quality of education for our students.

So with a freeze on hiring and salary increments on the horizon, the board says they will be working on a supplemental budget request that could at least give teachers the salaries they deserve.

By the same token, however, some board members are not happy that travel seems to more of a priority than teacher pay.

Department travel is not always an issue when it comes to GovGuam agencies, especially when it’s for investing in the local economy and educational purposes. But for the Department of Education, a request to participate in an annual conference became front and center at last night’s Guam Education Board meeting.

In this particular case, it’s for the October NASBE conference, or National Association of State Board of Education. The request comes at a time when GDOE is preparing to implement a freeze on salary increments, bonuses, or any upward adjustments on pay, as well as on travel. However, an exception can be made on travel if the agency is a member of the organization—in this case, GDOE is a member of NASBE.

GEB board member Peter Alexcis Ada took issue with the travel request which would send board members to Denver in October.

“I understand we are members of certain committees but it’s also our equal responsibility to let them know that because of financial constraints, how can I face the public and say, or the teachers, well I’m sorry because you can’t have your increment, but I’m going on my trip. I just cannot face the public on that. This is the people’s money,” he lamented.

“I look at our members on the board, we’re all volunteers, sir,” responded GEB Chairman Mark Mendiola. “We spend a lot of time dealing with policy. These national conferences, although folks may think it’s a junket trip, I’ve been to one. I was actually supposed to go as a new member. I declined to go. But as part of an academic organization and getting to know what’s going on with the education system at a national level, that really affects us … I understand you made points that the budget–we gotta look at investment also in how we operate as a board.”

But with the freezes already announced—including a four month freeze effective September 1 on all hiring except for federally funded and teaching positions, as well as a fiscal 2019 freeze on all salary increases—the education department isn’t giving up, acknowledging that teachers and other education employees worked hard to earn the salaries they deserve.

Mendiola says they will work on a supplemental budget request that could, at the very least, address some of these issues.

“I’ll be coming to the board in our committee for a supplemental request to address the issues of the [school resource officers] and the internal audit and for the reclassification of promotions,” noted Mendiola.

Meantime, GDOE will also be scheduling a work session next month to discuss a fiscal 2019 budget spending plan as they will have to work with $15 million less in their overall budget.