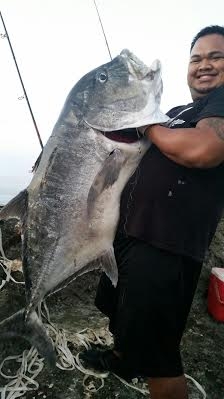 Fish was caught while man was cliff fishing.

Guam – A local man caught a monster fish on Sunday.

A monster mamulan to be exact. Ed San Nicolas caught an 81 pound mamulan or skip jack off the eastern coast of Guam. San Nicolas says he and his friends were actually cliff fishing when they caught this monster. Cliff fishing is an old Chamorro custom that is not done often but it involves casting out lines into the ocean from the edge of a cliff. San Nicolas caught the fish at around 5:30am Sunday morning and then took it to the Bem Yore mart to weigh it. He says this is the biggest mamulan he’s ever caught.

“What happened was the pole went off and it was a really big hit and something that we never experienced and so we kept fighting it and fighting it fighting it for a long time it gave us a good run it kept running and we finally brought it in and from the top of the cliff we looked down and we saw it and I ended up climbing up the cliff and we looked down and saw it. So I ended up climbing down the cliff jumped off and it’s usually something I don’t usually do but it’s just something I really wanted so I jumped off and ran off to the edge of the table and ended up pulling it up on top of the table and sure enough it was that trophy fish we’ve been looking for,” said San Nicolas. The local fisherman says there’s only about four or five small groups of people that he knows of who keep the tradition of cliff fishing on Guam.