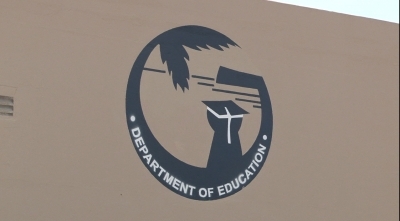 Ada said, “let the board of education, the body of 7 in consultation with legal counsel. The board will finalize what ever it’s going to do.”

The motion failed–4 nays and 3 yeas.

The highly-anticipated Bill of Particulars was finalized and released to Jon Fernandez and his legal counsel David Lujan.

Meanwhile, on Tuesday, Fernandez’s legal counsel responded to the media for the first time since the termination of Fernandez’s contract.

While Attorney Lujan says they look forward to “answering any allegations,” the process by which Fernandez was terminated and the actions thereafter has already been tainted. “He should be reinstated as soon as possible,” he said.

Other items discussed during tonights meeting included “Code of Ethics” and GEB board policy 409.

At the last GEB meeting, the board passed a motion to sustain Fernandez’s pay as well as any other benefits mentioned in his contract until the board finalizes on the superintendent’s termination.

Also on the agenda was the subject of transgender policies and a discussion on Chamorro Studies.