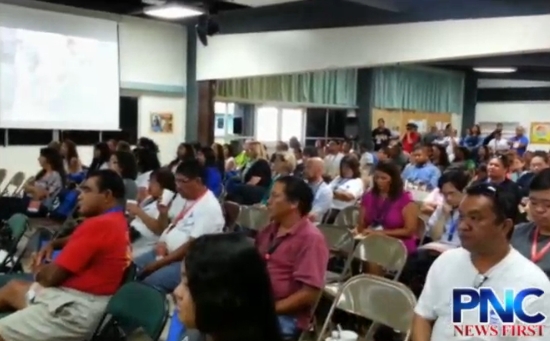 Educators from around the region were on Saipan, discussing global trends and how they affect cultural heritage in the 21st century classroom.

Saipan – Counties and territories in the Pacific region convened last week for the 40th Pacific Circle Consortium. University of Guam president Robert A. Underwood highlighted the importance of empowerment in education as the keynote speaker on day two of the week- long event.

Underwood says, “Education is supposed to be addition and not subtraction. You are supposed to add to them and who they are. You empower them to be themselves and give them knowledge of their ancestry of their parents and grandparents.”

In a time where educators unite under one banner, Underwood also warns that consensus does not always mean something is the right thing for a community, especially when considering cultural heritage in 21st century education.

“Just because we are all in agreement with something, does not make it so. You have to defend it…and deal with the criticism,” explains Underwood.

The event, hosted by the CNMI Public School System, Northern Marianas College, and RTI International, aims to promote understanding and camaraderie among countries in the region.

For Rota school counselor Elvira Mesngon, including pacific literature in her classroom was a topic she enjoyed discussing during one of the sessions.

Mesngon says, “Why not have something that our kids are familiar with and can relate to in the classroom? It only makes sense that we educate them and that we do also have scholars in literature.”

Fellow educator and Kagman High School principal Leila Staffler took part in the discussion and explained her excitement about the consortium.

Staffler says, “I really enjoyed all the different topics. They are really close to home…the work that they are doing for education is pretty exciting.”