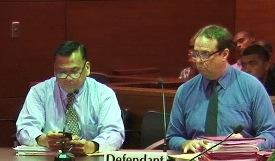 With the trial of UOG professor Michael Ehlert a month away, there are still a couple of issues to resolve before jury selection can begin.

Guam – Michael Ehlert was accused of sexually assaulting three University of Guam students in 2014. His trial is next month, and at today’s pre-trial conference, counsels tried to finalize all matters. Ehlert’s attorney, Jay Arriola, is requesting for a final witness list and exhibits from the prosecution.

“We have not received the government’s final witness list for the purposes of jury voir dire and jury selection, nor have we received the final, or any, exhibits as to be prepared for trial. We’d ask that all be provided within a week in anticipation of trial commencing within a month,” Arriola said.

But Assistant Attorney General Matt Heibel doesn’t feel these are urgent matters to which to attend. The prosecution submitted a preliminary witness list, which Heibel says is similar to the witness list the defense submitted.

“Having a final witness list – that doesn’t really seem necessary since we’re all, more or less, calling the general group of the same people,” Heibel responded. “In terms of exhibits, certainly all discovery is fair game, but we can submit an exhibit list roughly a week or so before trial, just in case there’s any specific questions about those exhibits. But obviously, everything that we will be using has already been provided in discovery.”

The prosecution’s case-in-chief is expected to last about a week, depending on the defense’s cross examination. Heibel adds that jury selection may take some time because of the media attention Ehlert’s case has received. And on that subject, Arriola noted his previous request to prohibit cameras, and continued to push for a jury questionnaire.

“We have filed, in pre-trial, a motion to prohibit cameras in the courtroom based on its effect in our being able to select a fair and impartial jury. We will renew our request that we be permitted a jury questionnaire,” Arriola said. “In order to verify our motion to exclude cameras, we need to gauge the effect and the extent of the media exposure on the jury venire’s ability to remain fair and impartial, notwithstanding the media publicity generated in this case, which has detailed a number of the facts that will or will not be presented to the potential jury.”

Arriola adds that the use of a jury questionnaire proved very effective, especially in high-profile cases, such as the highly-publicized trial of ex-cop, Mark Torre, Jr.  And while the prosecution agreed that a jury questionnaire would also be helpful in this case, Judge Vern Perez maintained his stance on the matter.

“I have my preference to really not utilize a questionnaire,” Judge Perez said. The media question will be asked at voir dire, he stated. “I don’t want to bring everyone in for one day simply to get a questionnaire and answer it because it’s going to take time for you to review that. I know it’s a high-profile case. At the same time, it’s not likely as high-profile as the case you refer to. But you’re welcome to try.”

Both parties plan to meet to put questions together and finalize the questionnaire. A hearing to discuss the matter will be on July 6.

Judge Perez denied both motions to exclude evidence and to dismiss indictment. Ehlert’s jury selection and trial is slated for July 12 at 1:30 p.m.