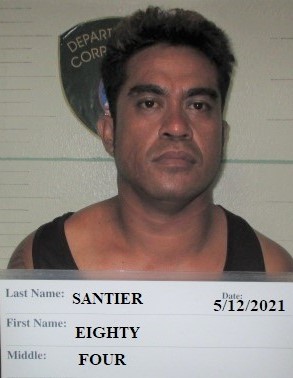 On Tuesday, May 11, 2021, officers from the Southern Precinct Command initiated an Aggravated Assault complaint that occurred by the San Miguel Catholic Church in Talofofo.

Preliminary reports suggest that upon the officers’ arrival, they noted a woman being treated by GFD personnel for head injuries. Through the course of the investigation, officers learned that the woman was intentionally struck by a white Scion XB that was operated by her boyfriend, 36-year-old Eighty Four Santier.

Witnesses interviewed indicated that the female victim was walking towards San Miguel Catholic Church with her daughter and niece when Eighty Four Santier struck the victim with the car.

The victim was later transported to Guam Memorial Hospital for treatment and care.

Eighty Four was later located and was arrested for the following offenses:

Eighty Four Santier was subsequently booked and confined at the Department of Corrections.