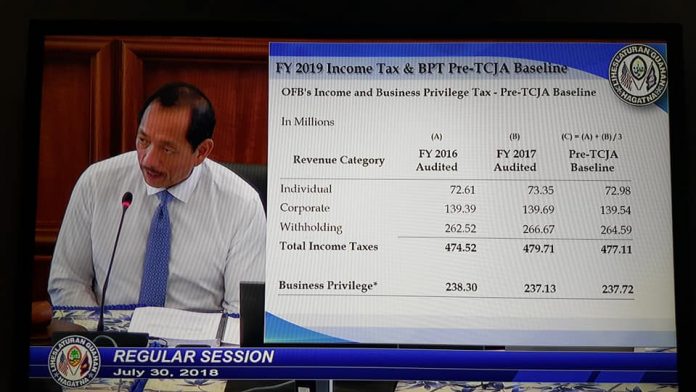 “Thankfully the [Tax] Amnesty [Program] and the willingness of the Legislature to pass the one percent increase in the BPT has helped us stabilize,” Speaker Cruz told lawmakers yesterday.

Guam – Emergency session begins at 9:00 o’clock this morning in order for senators to further vet Speaker and Appropriations Chairman BJ Cruz’s Bill No. 323-34 (COR), a draft Fiscal Year 2019 budget for the Government of Guam.

Yesterday, senators maintained Cruz’s proposed maintenance of the April 1, 2018 increase in the business privilege tax from 4% to 5%, but threw out Cruz’s proposal to increase from 7/18 percent to 7/9 percent the property tax on improvements, such as buildings and infrastructure, on local real estate. Proposed by Sen. Fernando Esteves (R), that amendment to the budget bill now in play placed an otherwise balanced budget at a $23 million deficit.

Over the past weekend, Cruz characterized the rapidly evolving FY19 spending plan a “middle path that reduces the size of the operating budget while  maintaining basic services.” After calling for an emergency session on Monday morning, once all were gathered, Cruz both thanked and reprimanded his colleagues with a heavy dose of realism. Now that his spending plan is actively under the knife and microscope, it’s up to his colleagues to make it work or come up  with another solution to a pending fiscal year plagued by a combination of the deep revenue gashes left in the wake of the federal Tax Cuts and Jobs Act and an entrenched unwillingness in the community to accept tax increases after revelations that the Calvo Tenorio Administration and its Dept. of  Revenue and Taxation have failed to collect anywhere from tens of millions to hundreds of millions of dollars in revenues past due and payable to the Treasurer of Guam in accordance with tax laws already on the books.

Faced with a shortfall as deep as $145 million due to the Trump Tax Cuts, Cruz’s Office  of Management and Budget staff reportedly spent months strategically shaving down every nook and cranny OF THE Fiscal ‘19 spending plan they could, while the Appropriations Chairman pitched every new uptick in taxes he deemed plausible, held hearing  after public hearing, and met privately with senator after senator to vet tax bills and tax repeal bills. Cruz expressed gratitude, patience, and frustrations with his fellow senators in getting to his point on Monday morning.

“But it really was where we were just, ‘alright, fine,’ we would go out there and you would say, ‘no increases, no increases, but this is what’s going to happen, and we’ll all learn through it and we’ll suffer through it and we’ll crash and learn,’” Cruz said, recalling the tumultuous process of balancing the immediate need for easy-to-collect taxes with the frustration felt in the community over a general lack of tax enforcement at DRT.

Approaching the commencement of this week’s emergency session on Monday and hoping to have a viable budget in place before the end of the next month, Cruz held that his plan could work because of a combination of (1) the Calvo Tenorio Administration’s Tax Amnesty Program to collect unpaid revenues without penalty, (2) incremental raises in the business privilege and property taxes, and (3) government-wide spending cuts to make up the shortfall. This morning, senators must find common ground on where to make up the $23 million lost on Esteves’s successful amendment to drop the limited property tax hike.

“Thankfully the amnesty and the willingness of the Legislature to pass the one percent increase in the BPT has helped us stabilize,” Cruz told lawmakers yesterday. “And I heard your concerns. I heard that you had very little appetite—you have no appetite at all for increasing the BPT another point five,” he said, recalling senators’ unwillingness to raise the BPT to 5.5 percent from five percent, as Cruz had proposed in a trial balloon leading to the agreement to keep it at five.

Meanwhile, Sen. Telena Nelson (D) reminded the public and senators that neither the business community nor wage and salary earners have been left out of President Trump’s Tax Cuts and Jobs Plan, insinuating that all should be mindful of that fact when facing the prospect of an unbalanced budget that could eliminate jobs altogether if a compromise can’t be  reached.

“But as a community, it has to be understood that the tax break of these corporations, they’re getting 14% and the tax withholding, which is a 20% increase in our paycheck and the 5% BPT, that’s what this body is proposing, or the 5.5%, should not impact consumer products,” she said.

At 12 percent less than FY18, yesterday morning Cruz’s general fund operations package stood at $641 million, making the collective year-over-year cuts and identifying an additional $90 million in revenue necessary to help make up for the shortfalls caused by the Trump Tax Cuts.

Here’s how that $90 million breaks down:

As mentioned, his proposed property tax increase on buildings from 7/18 percent to 7/19 percent would have raised $23 million. Going into this morning’s session it is understood that Cruz’s written identification of a $7 million reduction in Retirement Fund outlay still stands. That figure is based on a $2.5 million decrease in retiree medical, dental, and life insurance premiums due  to participation in the Group Health Insurance program, as well as an annual $4.5 million decrease in retiree contributions,  owing to a reduced rate.

Bill No. 323-34 (COR) also appropriates $5 million to help shore up Guam Memorial Hospital Administration’s deficiencies identified in a recent Centers for Medicare and Medicaid report on GMH. Too, the budget bill provides $1.5 million towards startup costs for the Simon Sanchez High School rebuild, as proposed by Sen. Frank Aguon, Jr.

As with any given fiscal year budget, projections  are fuzzy at best till economic conditions play out and revenues actually roll in—all fingers crossed—somewhere within the neighborhood of a black and white spending plan.