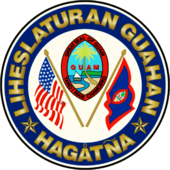 Earlier today – Speaker Therese Terlaje issued a letter calling for an Emergency Session – which is scheduled for tomorrow at 9 am, in order to address the island’s economic situation.

PNC’s Don Sulat has more details on this story.

In a letter to the members of the Guam Legislature, Speaker Terlaje cited the negative impact of the pandemic, which includes unemployment, increased food, and housing insecurity, along with the recent rise in gas prices, as the reason for the emergency session.

The emergency session follows a recent petition by Senator Moylan to get 4 bills on the floor in order to help with the cost at the pump and at the grocery store.

The Bill to be considered during tomorrow’s emergency session are as follows:

Bill 260, which was introduced by Speaker Terlaje as an “act to repeal Public Law 34-44, relative to reducing Liquid Fuel Tax Rates by 4 cents per gallon to rates prior to January 1st, 2018.”

Bill 261, also introduced by the Speaker, is relative to “eliminating the liquid fuel tax.”

According to Moylan’s June 6th petition regarding the aforementioned bills, “while none of these 4 pieces of legislation would completely solve this fuel crisis, they each bring an element to the table which would provide consumers some relief at the pump.”