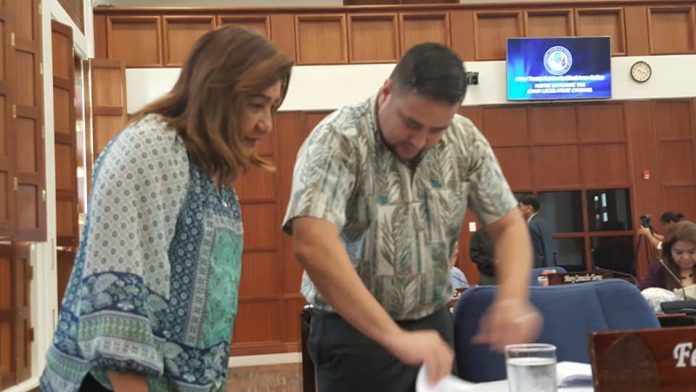 Guam – Emergency session on the FY19 budget act was slated to resume at 8:00 o’clock this morning, and the gavel finally went down by about 8:45. Only 90 minutes into what Appropriations Chair BJ Cruz had hoped would be 12 hours of session today, senators recessed by 10:15 a.m. till 12:00 noon, at Vice Speaker Therese Terlaje’s repeated request. Terlaje pleaded with Cruz to call recess so colleagues could consider the remainder of $23.7 million worth of budget cuts introduced by outgoing Sen. Fernando Esteves (R).

After the rejection of Appropriations Chairman BJ Cruz’s proposal to raise the property tax on land improvements yesterday, Cruz ordered senators to make up the estimated $23 million shortfall with cuts. Apparently Esteves took special heed. But after passionate objections by Sen. Frank Aguon (D), Esteves withdrew his first amendment, a proposal to offer the Dept. of Education flexibility on how to use a million dollars in seed money to get the engineering process started for the construction of a new Simon Sanchez High School in Yigo. Aguon reiterated that Sanchez students have been waiting for more than eight years for a new school.

Esteves’s second amendment, a proposal to reduce the Governor’s Office budget by a million dollars, passed, after no objections. Esteves has made no secret of his willingness to reduce the pool of front office political hires approaching FY19. By October 1, most of those hires who serve at the pleasure of the exiting governor may only enjoy three months of employment, anyway.

Debate on his third amendment, to reduce the Legislature’s budget by $1.1 million, is scheduled to resume at noon. Tune in to PNC News First on ABC7 at 5:30 tonight for a closer look at what’s making headlines.