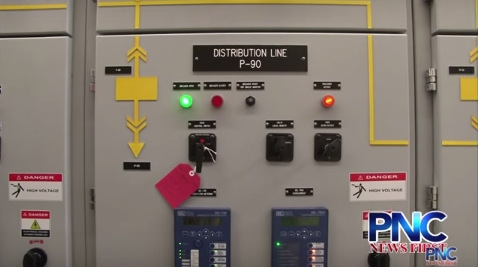 This is the crux of first green solutions complaint against GPA. According to Rick Sparacio, CEO of First Green Solutions, it all has to do with how many kilowatts per hour a customer is being billed and how GPA arrives at that number.

Guam – The owner of an energy consultant film says GPA has been overcharging commercial customers by the millions. Tonight he shares with us the details of his companies investigation.

“These people are doing what they can to improve their power factor and reduce the amount of energy required by GPA, yet for some reason GPA is not reducing the kwh on their power bill, personally we believe because the new smart meter is not calculating it correctly,” said Sparacio.

This is the crux of first green solutions complaint against GPA. According to Rick Sparacio, CEO of First Green Solutions, it all has to do with how many kilowatts per hour a customer is being billed and how GPA arrives at that number. Remember kilowatts per hour is energy that customers use, or in the beer analogy…the drinkable portion of the beer. Sparacio contends that the way GPA calculates how much KWH a customer uses is incorrect and ultimately translates to overcharges.

Here’s an example: The Julale shopping center. First green says that GPA takes the amount of kwh for Julale for December of 2015, which is 105,860 and charged the customer based on that number…this according to Sparacio is incorrect. Sparacio says that gpa must take the billed amount of KWH, 105,860 and multiply that by the power factor tariff, which is .85…this would give Julale a new, properly adjusted power usage of 89,981, divide that number by the number by the average power factor given by the smart meter and you get a new billed kilowatts per hour of 92,382. This is a discrepancy in billed power usage of 13,483. Which if multiplied by the LEAC rate at the time is a difference of 3,101 which if multiplied by the three years since the smart meters were installed totals of discrepancy of $111,639 for just one account.

Previously GPA general manager John Benavente says that the overcharges GPA would have to pay back were ” overblown.” Sparacio says that the Julale shopping center is just one account and a relatively low energy consuming account compared to other businesses such as the Micronesia Mall or the Westin resort, which according to Sparacio, produce anywhere from 1,000-1,500 kilowatts per hour, which is 10 times more than what Julale produces per hour.

“There’s definitely additional calculations that need to be implemented to follow the tariff and to adjust for improved power factor so that as a client does whatever they do to improve their efficiency and raise their power factor to a higher level it is not working against them it’s working for them to have a significant reduction on their power bill kwh usage,” said Sparacio.

In other words, first green says that GPA is over billing customers by wrongly calculating the amount of energy a customer uses or their billed kilowatts per hour. They say the money GPA would have to pay back is not overblown, if the Julale shopping center is just one example and they are a relatively low energy consuming account, customers with 10 times the amount of usage would then be overcharged ten times more than Julale…which would in fact equal millions of dollars…Sparacio also says this specific issue is only on Guam.

“I’d like to also add that this is not happening other places in the world, this happens here on Guam but not other places,” said Sparacio.

Both the administrative law judge and Lummus consulting, who investigated the complaint found discrepancies of overcharging on GPA’s part but need more information before they can make a final judgment. GPA says they will have a response to the PUC ready by February 25th.