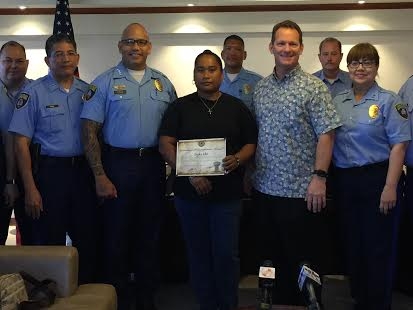 Engky John and Foustena Kianam helped protect an officer who was getting assaulted at the Hemlani Apartments.

Guam – Acting Governor Lt. Governor Ray Tenorio gave a special award to Engky John one of two women who helped prevent an officer from getting further injury during an assault at the Hemlani apartments

A Guam Police Officer was assaulted at the Hemlani apartments on June 21st. During the assault Engky John came to the officers rescue and helped to chase away some of the men who were assaulting him.

“I tell the other boy to stop don’t fight with the cops,” said John.

Chief of Police J.I. Cruz commended John for doing the best she could to help the officers who responded to a complaint at the Hemlani apartments. Both Chief Cruz and Acting Governor Ray Tenorio called John a hero. “Any person in blue with a patch on their shoulder and a badge on their chest would come and support you and defend you but this time it was the other way around where you came to support and defend them and that’s a very honorable and heroic thing for you to do that shows valor and integrity and we appreciate that and every person in this community no matter where they come from whether they are from Chuuk or if they’re Chamorro they want to make sure that they surround themselves with good people like you,” said Lt. Governor Tenorio.

John was given the Governor’s humanitarian award for her aide and defense of Guam police officers. Another woman who was not there today named Foustena Kianam also received the same award.