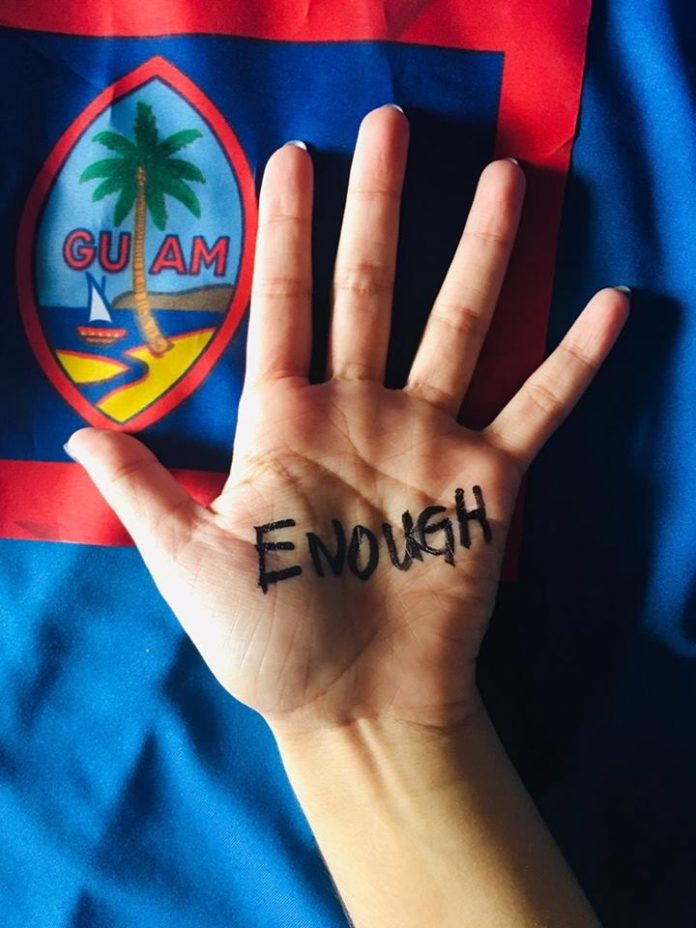 Guam – The Community says Enough is Enough! The Guam Family Justice Center Alliance has launched a walkout against sexual assault, with numerous community partnerships including the Guam Legislature and Mayors’ Council of Guam.

The event is scheduled for Wednesday, April 24 at 5:00 p.m. at sites like the UOG intersection in Mangilao to ITC in Tamuning all the way to Agat by the Fish Market.

About 10 sites have been identified for the walkout and the list continues to grow.

Participants are asked to write the word ENOUGH on the palm of their hands, to raise them against sexual assault at 5:05 pm and will last through 5:20 pm.

Outraged at the victimization of children by sexual predators, the local nonprofit has inspired lawmakers and other community members to get involved in the walkout.

This call to action follows the multiple sexual assault cases that have made it into the courts of Guam and through the local justice system.

“I am humbly asking all my colleagues and counterparts from the other two branches of government to join me and be a part of this outreach. We need to stand in solidarity and send a unanimous message, that any act of violence, especially sexual violence, towards an innocent child, is simply not acceptable.”

On K57 Morning’s with Patti, Muna-Barnes suggests bringing the heat on sexual predators.

“We can pass all the laws – if we don’t put enforcement to what is in place right now, then we will continue to fail our children and victims that are out there,” Muna-Barnes said.

Meanwhile, Sen. Regine Biscoe Lee said, “Those who commit brutal acts of violence against our children are evil. And, we can only fight that evil together. While nothing we do can soften the pain that has touched these children and their families, we can stand for them; we can say we won’t rest until they find justice-until this stops and our children are safe.”

A couple of bills have been introduced, focusing specifically on Criminal Sexual Conduct on Guam.

Muna-Barnes’ Bill 51-35, would prohibit judges from applying the existing safety valve law on any case that involves the criminal sexual conduct of a minor.

According to the speaker, movement is seen from all sides, to improve the system.

During her K57 interview, the Speaker threw chemical castration back on the table, referencing the existing Public Law 33-67 that requires the Department of Corrections to create a chemical castration program for convicted sex offenders who are eligible for parole.

The law was signed during the Calvo Administration in 2015. Former DOC Director Tony Lamorena had previously stated that the chemical castration law is an unfunded mandate, which has additional obstacles such as implementation and monitoring challenges.

You can visit the Monique Baza Story on Facebook for the latest information and location nearest you.