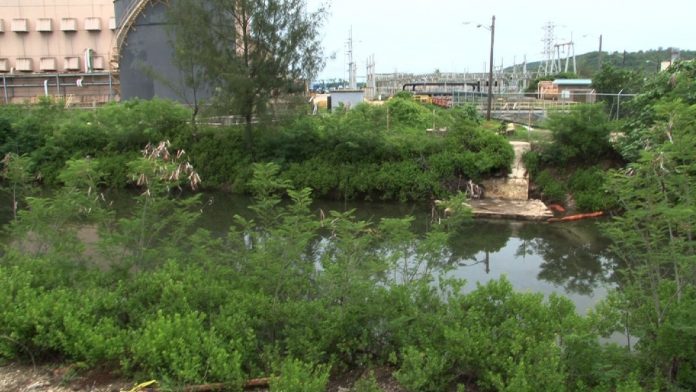 After the explosion, the U.S. Coast Guard’s Incident Management Division estimates that 1,000 gallons of fuel and water mixture was discharged into the surrounding waters.

Guam – More details into the Cabras 4 explosion and the effect it had on the surrounding environment, including the Apra Harbor.

The Cabras west infiltration pond was one of the areas affected by discharged fuel after the explosion. The pond leads into a storm drain and into Apra Harbor. Initial samples revealed that the pond was contaminated but that the contaminants were well below levels regulated by the toxic substances control act. However, Unitek environmental, the company hired by GPA to test the pond for contaminants, told GPA that the bottom of the pond may be contaminated with petroleum. Additionally, during the clean up process it was observed that the pond was still receiving oily water from the inlet, which quote “leads one to hypothesize that the storm drains still contain petroleum products.” Unitek environmental said there could still be a significant amount of petroleum beneath or within the coral. Unitek recommended for GPA to consider collecting deeper core samples of the bottom layer to see the extent of petroleum contamination and to block the channel between the pond and Apra Harbor because of the contamination. GPA tells PNC that the pond and the surrounding area has been cleaned and cleared by GEPA. GPA says the scope of the work for closing the causeways on the pond is still being completed. GPA says they have declined to dig deeper core samples as recommended by Unitek.