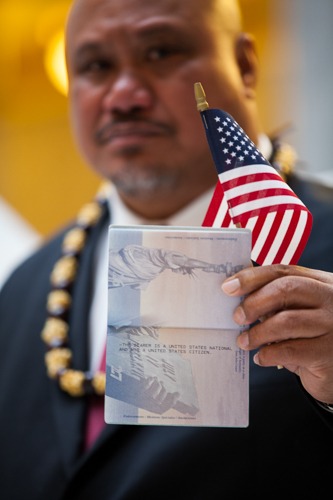 The fight to overrule the Insular Cases wages forward.

Equally American Founder Neil Weare announced that an online petition has started to call on the White House to publicly reject the Insular Cases.

Weare said, “The Biden Department of Justice is going to have to clarify what its position is when it comes to citizenship in the territories as well as the Insular Cases.”

Advocate groups such as Equally American, LatinoJustice, Hispanic Federation, and a number of others who are affected by the Insular Cases have voiced their stark opposition to the century old Supreme Court opinions.

To Weare, the Insular Cases are a series of “racist decisions” that have lead to unequal treatment for people living in U.S. Territories.

In a meeting with U.S. Territory Advocacy groups this past May, Laura Esquivel from the Hispanic Federation voiced how the Supreme Court should see the Territories’ citizens.

Esquivel said, “The status of the territory itself should have no bearing on how people, individuals are treated on the island. They’re American citizens.”

According to Weare, this treatment has resulted in 3.6 million territory citizens to be treated as second-class citizens — denied of their right to self-determination and decolonization.

The case of John Fitisemanu vs. The United States echoes this claim.

Fitisemanu was born in American Samoa on U.S. Soil but is not recognized as a U.S. Citizen under federal law.

Weare said, “Here in this picture has a U.S. Passport and inside in the fine print it says the bearer of this is a U.S. National but not a citizen of the United States, whatever that is supposed to mean.”

These Supreme Court decisions have also barred some citizens in the territories from availing to federal aid programs — such in the case of Vaello Madero, who owed the federal government thousands of dollars after he was discovered receiving SSI benefits after moving back to his home in Puerto Rico.

Similar stories are told in Guam with late twins Katrina and Leslie Schaffer who couldn’t avail to federal aid to support their medical needs due to their residency on Guam.

The U.S. Supreme Court has given the Biden-Harris Justice Department until August 29th to either support or oppose calls for the Supreme Court to overrule the Insular Cases.