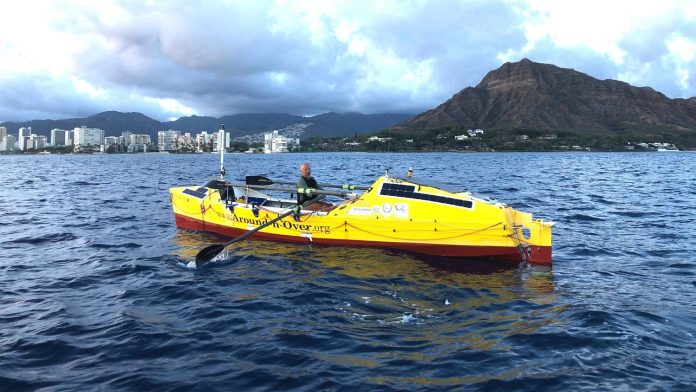 On Saturday at approximately 5:39 pm, Erden Eruc, the first person to circumnavigate the world by solo human power, docked at the Marianas Yacht club in Piti.

The 15-time Guinness World Record Holder initiated his journey from Crescent City, California, setting his sights on mainland Asia, with the intent to continue his journey by bicycle to the foothills of Everest and climb it. According to Erden, attempting this feat is in honor of his dear friend, who unfortunately passed away during a rock climbing accident.

However, as PNC’s Don Sulat previously reported, Erden had to divert his original route to make a stop in Guam due to strict entry procedures in Hong Kong.

After arriving on the island, Erden spoke about his journey to Guam, which was not easy. In addition to working through rough sea and wind currents, Erden slept a total of 1 hour and 15 minutes the night before docking. Furthermore, Erden had to diligently row to keep the boat moving and oriented in the right way.

Erden has made history through this second adventure, operating the first human-powered vessel to cross the Mid-Pacific waters between Hawaii and the Northern Marianas.

When asked about the preparation prior to embarking on his journey, Erden answered by stating:

According to Erden, from Guam, he will go to Balikpapan and work his way to Singapore. To follow Erden in real-time, individuals can visit ERDENERUC.COM