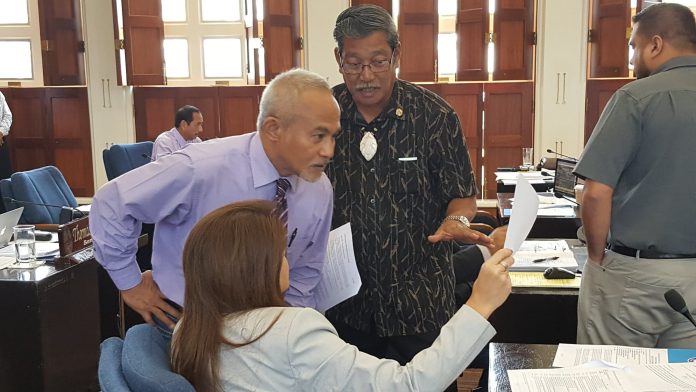 On Tuesday morning, after Sen. Jim Espaldon (R) publicly revealed insider information that the visitor industry was primed for a substantial increase in the rate at which room nights are taxed, lawmakers adopted his amendment during emergency session to raise the hotel occupancy tax (HOT) from 11 to 13 percent. What follows is a description of how that process unfolded.

HAND VOTE #2: Motion to Adopt the Amendment, As Amended

Guam – Let the lobbying begin, the ‘HOT hike’ is in! There is now bipartisan support for a 12-month increase in the local hotel occupancy tax, from 11 to 13 percent of room rates. It all adds up to an 18.2 percent jump in the rate hoteliers might have to pay the piper to host visitors, come October 1, the start of the next fiscal year.

At the resumption of emergency session on Tuesday morning, a majority of budget beleaguered lawmakers agreed on the higher hotel levy to help plug the Trump Tax Cuts-riddled revenue stream—this, after midmonth public hearings in which industry representatives told lawmakers the local accommodations market can ill afford even the slightest rate rise.

The turning point came during session when outgoing Republican senator Jim Espaldon proposed a compromise. “It might be time to bring it back up to 13 percent,” he said.

Instead of increasing Guam’s hotel occupancy tax from 11 to 15 percent, as originally pitched by Appropriations Chairman BJ Cruz, ‘why not 13 percent?’ After all, Espaldon reasoned, the rate was 13 percent many moons ago, before hotels needed relief from an economic downturn and the rate was lowered to 11. Now that tourism has rebounded and the Trump Tax Cuts are giving hotel operators a windfall anyway, how about giving 13 another go?

“I had talked to several companies, or owners of businesses, who are in the tourism industry,” Espaldon said. “Naturally, they can’t come out and say sometimes things that are contrary to what Guam Visitors Bureau or the board says, so they choose not to speak, period.

“But in private, their sentiments to me are that if we raise it, even to 15%, the tourists will still come. They know, tourists know, especially tourists from Asia, know that that’s a natural part of doing business, because they do it in their own countries, as well. But they can’t come out and say that publicly at a public hearing, especially when the very  board that governs the industry at the Guam Visitors Bureau is there making their presentation against any kind of increase.”

Be that as it may, Guam Hotel and Restaurant Association and Guam Visitors Bureau leaders were quick to keep lawmakers accountable and to restate industry opposition.

“And it’s nowhere in the statute that it was at 13 percent,” GHRA President Mary Rhodes told Newstalk K57 midday radio host Andrea Pellacani on Tuesday.

“Back in 2006, it was being introduced to go to 13 percent at the time, but it did not go through. The statute was really at ten percent in the ‘90s, and then it went up to 11, and then that’s where we’ve been. Regardless, GHRA and all of its stakeholders have been asking the Legislature to continue to look at areas of where to cut within government before we do anything [else].”

Even former Guam visitor industry heavyweight Richard Rennie weighed in. “This is bad legislation for an already tired destination.”

“So true!” Nault wrote back.

“When you take a look at the competition that Guam is up against, putting…additional burden on those same people that we’re trying to bring to Guam, it’s just not going to work,” Sen. Dennis Rodriguez (D) said to colleagues gathered at the Tuesday morning session.

“And so if I’m a travel agent from Japan, am I gonna be pushing people towards Guam? Probably not,” Sen. Regine Biscoe Lee (D) said, noting the higher room rates associated with rising occupancy taxes, and echoing the anticompetitiveness concerns expressed by the industry.

Ultimately, Sen. Biscoe Lee supported the rate hike to 13 percent, but only as a stopgap measure to prevent the rate from rising to nearby Saipan’s rate of 15 percent. “I can’t support that,” she said.

So far, it seems enough senators’ minds are already made up to retain the rate raise to 13 percent, and that they plan to keep it that way as the legislation makes its way through amendments and onto the governor’s desk. Their intention may insinuate that under mounting deadline pressure to balance the revenue-decimated FY19 budget, now is the time to take decisive action – especially at a juncture when the industry is given to promoting record-breaking arrival numbers and is enjoying considerable revenue savings due to the federal Tax Cuts and Jobs Act, but is showing few signs of sharing the wealth, despite overwhelming public and employee support, in the opinions of several lawmakers.

“I see a lot of the employees in the hotel industry struggling, and they have to have two to three jobs just to make it in what they’re being compensated for in that industry,” Sen. Louise Muna (R) said.

“The people of Guam, the taxpayers, are subsidizing the employment costs of the hotel industry, because apparently they’re not making enough to pay their hotel workers more than $9.40 an hour. The room rate went from $140 to $207 over the last six years. Madam Chair, that’s a 47% increase in the room rate.  How much of that went to the workers?”

If visitor industry trade organizations remain consistent, the pressure to reamend the HOT back to 11 percent will persist until a majority of senators are dissuaded against their own judgment, or until the governor decides whether to sign or veto the FY19 budget act, or any line item within it.