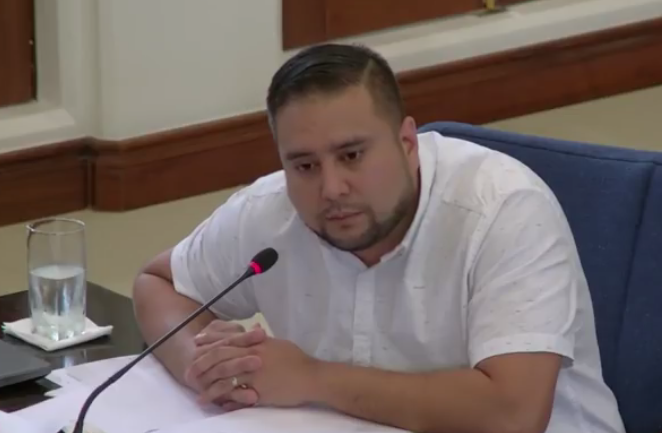 Guam – Standing up for the indigenous Chamorus,  Senator Fernando Esteves gave impassioned appeals to his colleagues gi fino’ Chamoru and in English to strike the increase on the Real Property Tax.

Esteves put forth two amendments yesterday. His first proposal was to strike the entirety of Section 2 from Speaker BJ Cruz’s “responsible” budget bill 323-34. Section 2 sought to maintain the Business Privilege Tax rate of FY18 at 5% and raise the RPT for improvements made on one’s property from 7/18% to 7/9%.

The senator just narrowly failed to gain a majority with his colleagues, and his first proposed measure was overruled at an 8 to 7 margin.

But that did little to deter him. The outgoing senator quickly proposed a second amendment, this time to do away with only the RPT increase. He was supported by a majority of his fellow lawmakers, and the amendment succeeded on the floor.

Both proposals were adamantly backed by congressional candidate Michael San Nicolas and gubernatorial candidate Frank Aguon, though each lawmaker’s support seemed to stem from a different political viewpoint. For San Nicolas, “leaning out” the current administration and starting with a bare-bones budget in 2019 would give Guam’s new leadership the rare opportunity to make good on their campaign promises. Aguon, on the other hand, was more concerned about what he characterized as some voters’ lack of trust in the current administration. He criticized the island’s leaders for simultaneously faulting the Legislature for not finding revenue solutions and yet continuing to hire nonessential personnel and give raises to its employees.

After Esteves’ second amendment passed, the Speaker called for a recess so he could “regroup” and explore other options to balance next fiscal year’s budget. That resumption will commence today at 9 AM, with Cruz possibly re-introducing a Hotel Occupancy Tax hike or a combination of an increase to the HOT and alcohol tax.