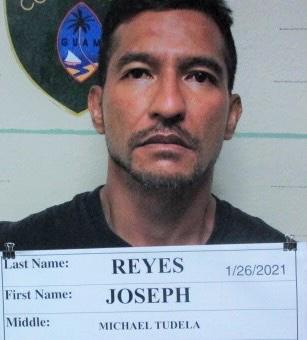 The Guam Police Department has arrested a 43-year-old man for family violence, possession of a schedule 2 controlled substance, and criminal mischief.

Police say that on Sunday, Jan. 17, their officers responded to a disturbance complaint in Talofofo.

The victim told police that her ex-boyfriend, Joseph Michael Tudela Reyes, stopped and told her that he was taking their son. Shortly after arriving at the victim’s home, they got into an argument.

According to court documents, Reyes was having a conversation in the front yard with their son, then approached the victim’s vehicle and allegedly began punching the victim’s driver-side window, door and pulled off the mirror.

The victim also told police she feared for her life but knew he would not hurt their son.

She called to inform GPD, however, Reyes fled the residence.

Then, on Monday, Jan. 25, police responded to a complaint at another residence in Talofofo and conducted a suspect check for Reyes. He was located sitting in his car.

Officers approached him and informed him of his rights and also noted that on the driver’s seat, there was a cylindrical glass pipe and a clear plastic packet containing a crystalline substance.

The substance tested positive for methamphetamine.