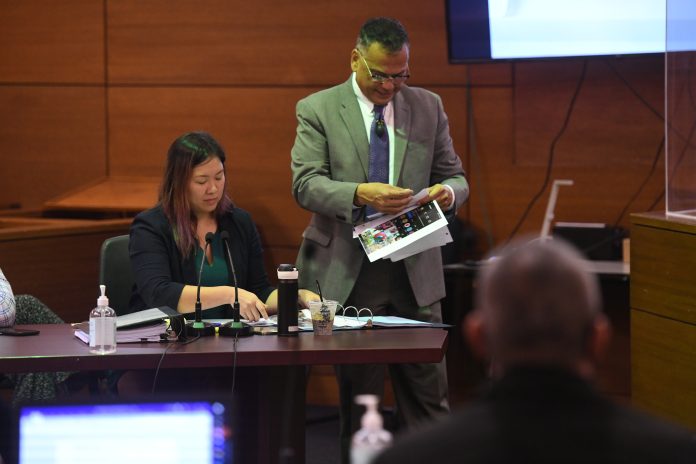 The Frank San Nicolas Trial continues. The prosecution rested their case today following the courts denial to have the prosecutions expert witness testify.

Here’s PNC’s Devin Eligio with the update from the Court.

Through a preliminary evidentiary hearing, the prosecution attempted to justify that the witness’s testimony would not determine guilt and would stay within the scope of her work.

She is the Program Manager at the Healthy Hearts Crisis Center under UOG.

She testified before an empty jury box.

The defense argued that they weren’t given ample time to prepare for this witness.

They also felt Aguon was unqualified to deliver testimony along the line of questioning the prosecution expected to give.

In response, the prosecution laid the foundation on her expertise in her field.

Through her ten year experience as program manager for Healthy Hearts, Aguon testified about victim behavior during and after a sexual assault.

Her testimony went as far as her education in neurobiology of trauma — or — how the brain responds to trauma.

Her testimony also recalled her experience working with and counseling victims of trauma.

She shared to the court the responses an individual may have to sexual assault, citing her education and experience in the neurobiology of trauma.

According to Aguon, some responses to trauma include:

Flight – the act of fleeing away from the perceived threat.

Fighting – the act of combat with the threat, verbal or physical.

and Fawning – the act of trying to appease the threat in hopes the threat would leave.

Aguon explained that a victim may experience one of these responses or all of them at once.

She admitted that she was in contact with Prosecutor Richelle Canto for trial preparation for this case.

She shared that she reviewed the victim’s intake file, but never met the victim or talked to her.

The defense raised doubts on whether or not she would be able to accurately testify about the matter if she never met the victim.

Aguon told the Court that she would only be able to testify hypotheticals based on her experience.

The prosecution’s motion to bring this Aguon to testify before a jury was denied.

She will not take the stand in front of a jury.

Canto stated that because the Court denied the motion, she “is forced to rest her case.”

The defense filed a motion to acquit San Nicolas and the Court will reserve that motion.

Defense attorney Arriola shared that they will call their first witness, the son of Frank San Nicolas, to the stand tomorrow.

This trial is ongoing and there will be more updates as it unfolds.