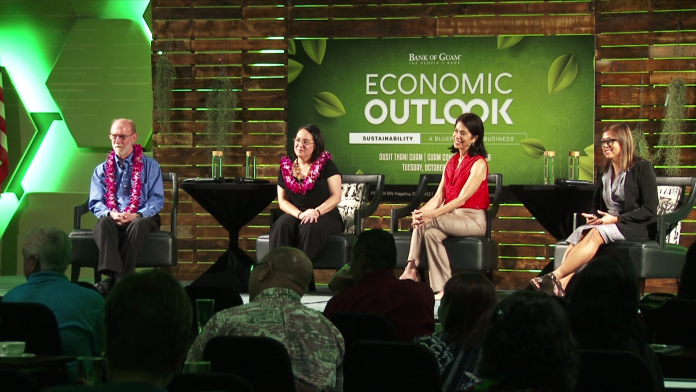 Guam – How to preserve our environment and culture while benefiting from a tourist-driven economy… that was the focus of the Bank of Guam Fall economic forum yesterday and they keynote speaker had some compelling data to share with proven results Guam could learn from.

While economy is usually the topic at economic forums, this forum was more focused on environment and cultural preservation. And the keynote speaker was someone with influential expertise and experience in carrying out both: Gina Lopez.

She is the daughter of Eugenio Lopez Jr. whose family owns Philippines’ largest media conglomerate ABS-CBN. Born into a family of affluence, Gina Lopez turned her privileged life into a life of love of giving—the mantra behind her own philanthropic organization called “I Love.”

But she’s also served in government as a steward of the environment. In a Ted-Talks style address, Lopez shared her experience in area development, particularly in small, impoverished towns and villages in the Philippines. But for Lopez, for this to work, the key is to focus on who is to benefit.

For example, in Manila in 2009, Lopez worked on a project to clean up portions of the polluted Pasig River.

“I saw this thing and I saw the creeks and I said clearly, clearly, clearly cleaning the creeks is critical and I didn’t think I was gonna be able to do it all so what I did was I started with one,” notes Lopez. The creek was called Estero de Paco, which was heavily polluted to the point that every square inch of surface water was covered in garbage.

The restoration of that one small creek alone contributed to a better community, says Lopez. It reduced crime rates and saved nearby residents money on healthcare.

“In the blotter incidents it was shown there were less people having their thumb prints because there was a 40 percent reduction in crime! I didn’t do anything I just cleaned the place,” Lopez exclaimed.

In another community in the popular tourist destination of Palawan, Lopez’s organization donated about a million pesos or roughly $20,000 to develop a small town with a unique rock formation.

“From 30 families, it became 300. When I next went there, the barangay captain told me, ‘Ma’am, everyone here has a job because of Ugong Rock,'” shared Lopez.

In the first year, the town had a 133,000 PHP economy which then grew exponentially.

One particular area in the Philippines also became a highlight not just for Lopez but for other keynote speakers as well: the town of Boracay which saw a tourism boom in the 1970s.

That popularity, however, came at an environmental price. Earlier this year, the government closed the tourist destination for six months so it can be rehabilitated. It reopened this month but a cap on visitors has now been implemented.

During the economic forum’s question and answer portion, Bank of Guam Chief Economist Joe Bradley answered questions about what could happen to Guam’s economy if we over-invite tourists, much like what happened in Boracay.

“We’ve done it before, over-invited visitors. The expansion of the tourism industry here, a number of hotel rooms that were developed in the late 1980s and early 1990s, it ended up causing us rolling power outages, ended up causing us raw sewage spills,” explained Bradley. “We’ve gotten better over the years but I think that should we face another construction boom like we had in the late 80s we will make many of the same mistakes because by then the people who learned the lessons won’t be making the decisions.”