Guam – Three people suffered what authorities described as minor injuries following an explosion that occurred near the Tree Bar at the Hilton Hotel in Tumon Thursday night.

Governor’s Spokesman Troy Torres told reporters shortly before midnight both of the injured were men and they were both in stable condition at GMH. One was 22 years old, and the other was 38. He declined to say what nationality they were. He emphasized that his statements about the injured had been double checked and corrected erroneous information provided earlier by other officials.

[The following raw video of  the immediate aftermath of the explosion at the Hilton Hotel Thursday night was edited by TV Production Manager Isaac Ngirbabul and shot by Chief photographer Eric Rosario. ]

However, Friday morning, Guam Homeland Security and Civil Defense Spokeswoman Alyssa Benito and GFD Spokesman Lt. Ed Artero both confirmed that, in all, 3 people were transported to GMH.

1. 22 year old Japanese male – struck in the head by an object hurled from the explosion while he was in the Hilton pool.

2. 23 year old a 23-year-old Filipino resident who was shoved during the evacuation of the hotel. Her injuries were not directly related to the blast.

3. 38 year old Caucasian  man – he complained of a burning sensation in his eyes and throat following the explosion.

GFD Spokesman Lt. Ed Artero reports the initial 911 call came in at 8:40pm. It happened during the Hilton’s evening Tropical Barbecue show. The entire hotel was evacuated soon after the blast..

Hilton General Manager Makoto Yasuhara said roughly 300 guests were staying at the hotel. Arraignments were made to transfer many of  them to other hotels in Tumon and elsewhere. However GPD gave the all clear shortly after midnight, the Hilton re-opened, and many of the guests returned to their rooms.

Torres said the cause of the explosion still had not been determined as of midnight. He said the scene around the Tree Bar, the Koi pool and the swimming pool would be treated like a crime scene until authorities determined what caused the blast. He declined to speculate on whether or not it might have been caused by a gas leak.

Guam Homeland Security and Civil Defense Spokeswoman Alyssa Benito said that K-9 Units from the military and GPD swept the hotel for any trace of explosives and they came up negative. No evidence of explosive reside was found, she said.

The force of the explosion however was great enough to be heard throughout the hotel. Some guests said they were awoken by it, others told PNC news that debris from the blast struck windows on the upper floors were they were staying.  Guam Police Department Spokeswoman Sgt. Liz Flickinger said the force was great enough to throw chunks of concrete about.

Yellow police tape was stretched around the Tree Bar and the swimming pool where the blast occurred. Officials were still  within the cordoned off area conducting their investigation after midnight. Security Guards were posted around the scene to keep unauthorized personnel from approaching the damaged area. However one hotel employee described what he called a large hole near one of the saunas by the pool.

The FBI, ATF and Homeland Security are assisting GPD in the ongoing investigation. 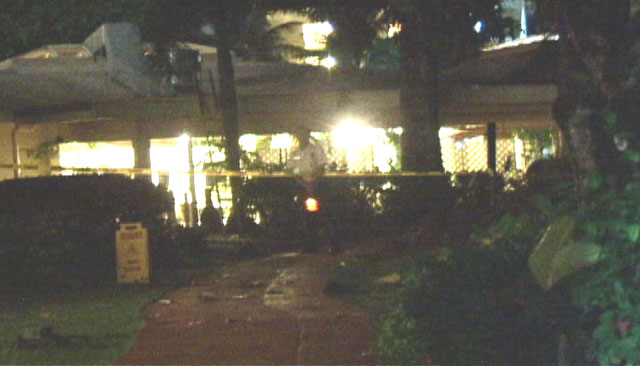