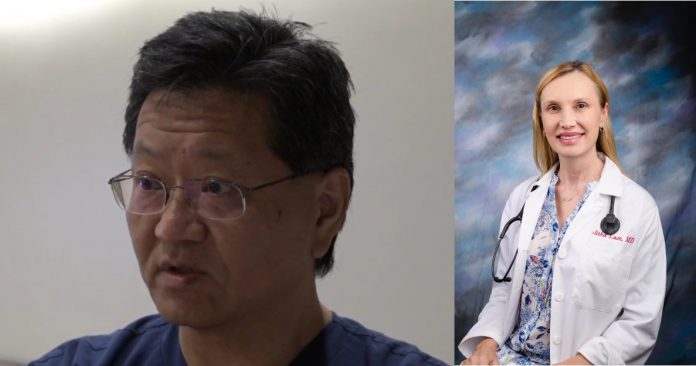 At least three Island doctors have penned letters to Governor Lou Leon Guerrero following up on a Newstalk K57 interview/PNC News article with the Governor, where she says that the Island’s private clinics, “should not charge for [COVID] testing. Because we, the government, pays for those testing.”

It took less than 24 hours after the Governor’s statements for the spotlight to hit an apparent divide amongst Guam’s medical community to become clear. 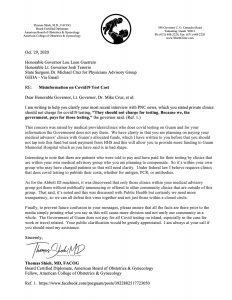 In his letter to the Governor, Dr. Shieh writes that Leon Guerrero should clarify her wording saying, “the Government of Guam does not pay for all Covid testing on island, especially in the case for work or travel related.”

“We have clarity in that you are planning on paying your medical advisors’ clinics with Guam’s allocated funds, which I have written to you before that you should not tap into this fund but seek payment from HHS and this will allow you to provide more funding to Guam Memorial Hospital which as you have said is in bad shape,” writes Shieh.

Dr. Jitka Lom from ExpressCare didn’t mince words in her open letter to the Governor, saying:
“You recently stated that ‘private clinics should not charge for Covid testing because the government is paying for that testing.’
Really?
Since the beginning of the pandemic, ExpressCare has received zero testing supplies and zero financial support for testing from the government of Guam.” 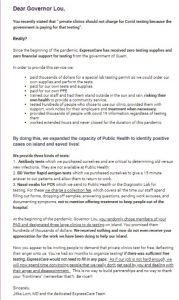 Lom’s letter went on to say that they themselves have paid for lab equipment and testing themselves, which ultimately “expanded the capacity of Public Health to identify positive cases on island and saved lives!”

PNC News reached out to Dr. Lom by phone Thursday but she was unable to speak, saying, ironically, she was on her way to pick up (customer paid for) test results from Public Health. She did say that her letter “says it all” and that her team is, “very disappointed and feel like [they’ve] been thrown under the bus.”

Much like Shieh, Lom also alludes to a distinct divide in the ‘have and have-nots’ among Guam’s medical community in her letter, writing, “at the beginning of the pandemic, Governor Lou, you randomly chose members of your PAG and designated three large clinics to do testing on island. You promised them hundreds of thousands of dollars. We received nothing and now do not even receive your appreciation for the work we have been doing to help our island.”

Lom concludes by writing, “now you appear to be inciting people to demand that private clinics test for free, deflecting their anger onto us. You’ve had six months to organize testing! If there was sufficient free testing, ExpressCare would not need to fill in any gaps.  As if our job is not hard enough, we will now spend time convincing people that we really don’t get paid by you and dealing with their anger and disappointment.   This is no way to build partnerships and no way to thank your “frontliners” (remember that?). Be nice!!!” 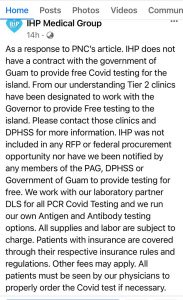 In a Facebook statement late Wednesday night when the PNC News originally broke, IHP Medical Group wrote, “IHP does not have a contract with the government of Guam to provide free Covid testing for the Island. From our understanding Tier 2 clinics have been designated to work with the Governor to provide free testing….please contact those clinics and DPHSS for more information.”

The clinic goes on to say, “IHP was not included in any RFP or federal procurement opportunity nor have we been notified by any members of the PAG, DPHSS or Government of Guam to provide testing for free.”

IHP issued an official letter to the Governor late Thursday night written by Dr. Hieu Campus, the president of the clinic.

“All of our PCR testing – which is the best and most accurate testing available – is performed by Diagnostic Laboratory Service (DLS) and is paid for by the patient or the patient’s insurance company.” 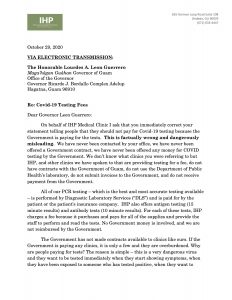 Campus doesn’t twist words, getting straight to the point saying: “the Government has not made contracts available to clinics like ours. If the Government is paying any clinics, it is only a few and they are overburdened. Why are people paying for tests? The reason is simple this is a very dangerous virus and they want to be tested immediately when they start showing symptoms, when they have been exposed to someone who has tested positive, when they want to show their employer that they are Covid-19 free, or when they want to travel. Unless a person is willing to wait as long as five days for an appointment at Public Health or at one of the free 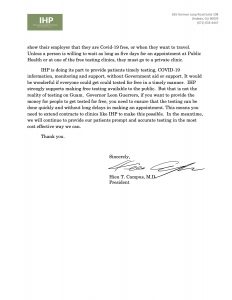 testing clinics, they must go to a private clinic.”

“It would be wonderful if everyone could get could tested for free in a timely manner. IHP strongly supports making free testing available to the public. But that is not the reality of testing on Guam. Governor Leon Guerrero, if you want to provide the money for people to get tested for free, you need to ensure that the testing can be done quickly and without long delays in making an appointment. This means you need to extend contracts to clinics like IHP to make this possible.”