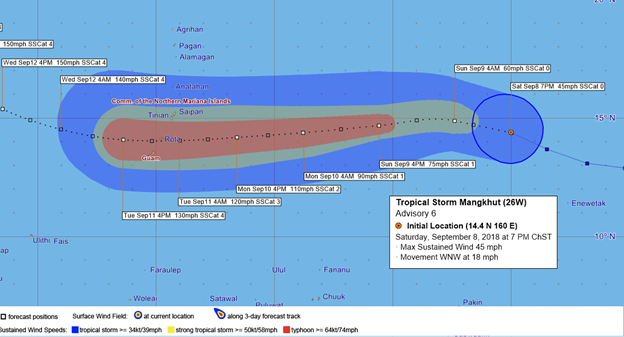 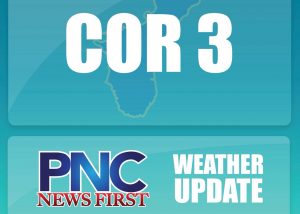 With COR 3 declared today at 7 PM, Governor Calvo has signed an Executive Order for pre-landfall declaration. This allows resources to be mobilized in order to assist the island’s Mayors and other GovGuam agencies in preparation for Tropical Storm Mangkhut. Rumored to potentially be the worst storm to hit Guam in more than a decade, GovGuam is not taking any chances.

Earlier today, PNC visited the Guam Office of Civil Defense, where village mayors were seen exiting the building. PNC followed-up with Mayor June Blas of Barrigada, who shared with us that OCD/Guam Homeland Security had urged them to clean up debris and vegetation in their respective villages. In order to mitigate potential hazards, Governor Calvo’s Homeland Security Advisor, George Charfauros Jr. stated that the Guam National Guard will be placed on Active Duty status on Sunday, in order to bring on more resources. Charfauros Jr.  also stated that FEMA’s Incident Management Assessment Teams are en- route, and will be arriving on Guam tonight.

As of today’s Heavy Weather Briefing, Tropical Storm Mangkhut is currently leaving the Republic of the Marshall Islands, making its way westward towards Guam. Mangkhut is expected to make its closest approach to the Marianas by Tuesday. According to Meteorologist Marcus Landon Aydlett, “while Mangkhut is still fairly disorganized, it is still maintaining its course towards Guam. We are looking at a Tuesday noon passage, as a Category 4 storm.”

Aydlett points out that the Tuesday noon impact is simply a forecast, and that strongest impact of Mangkhut may potentially come either Tuesday morning, or Tuesday evening as well. As Mangkhut has further developed , today’s prediction of Tuesday at  noon, has been sped up from yesterday’s prediction of Tuesday midnight.  As Mangkhut remains more than 1,100 miles east of Guam, its predicted to impact anywhere as far north as Tinian, or well below the south of Guam.

While there is a possibility of Mangkhut to deviate, Guam residents should take emergency precautions seriously. Unlike previous storms that have developed southeast of Guam which have a “windshield-wiper” effect compared to its forecast path, Mangkhut has been pretty consistent in its path to Guam. Even if Guam were to be spared from the eye of Mangkhut, damaging winds are predicted to extend outwards up to 100 miles from the center.

PNC checked in with Aydlett shortly before 9PM CST Saturday, and its current forecast predicts the center of the storm to pass through the Rota straight. While the eye-of-the-storm may spare the island, damaging winds are expected to extend 100 miles out, with Guam still within that 100 mile radius. The current forecast tract is still predicted to bring 10-12 inches of rain through Wednesday night.

Aydlett points out that severe damage is expected to wooden structures –  individuals with non-concrete dwellings should evacuate to safety. While the eye seems to be passing north of Guam, Guam will still be victim to some major storm effects. These include damaging winds and flooding to name a few.

“Bottom line, be prepared. Do not focus on that exact time of arrival or exact passage of its center of circulation.  Plan for a storm.” Marcus Landon Aydlett, Meteorologist