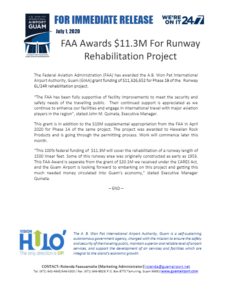 The Federal Aviation Administration has awarded the A.B. Won Pat International Airport Authority grant funding of $11,326,652 for Phase 1B of the Runway 6L/24R rehabilitation project.

“The FAA has been fully supportive of facility improvements to meet the security and safety needs of the traveling public.  Their continued support is appreciated as we continue to enhance our facilities and engage in international travel with major aviation players in the region,” stated John M. Quinata, Executive Manager.

This grant is in addition to the $10M supplemental appropriation from the FAA in April 2020 for Phase 1A of the same project. The project was awarded to Hawaiian Rock Products and is going through the permitting process. Work will commence later this month.

“This 100% federal funding of  $11.3M will cover the rehabilitation of a runway length of 1500 linear feet. Some of this runway area was originally constructed as early as 1953.  This FAA Award is separate from the grant of $20.1M we received under the CARES Act, and the Guam Airport is looking forward to embarking on this project and getting this much-needed money circulated into Guam’s economy,” stated Executive Manager Quinata.