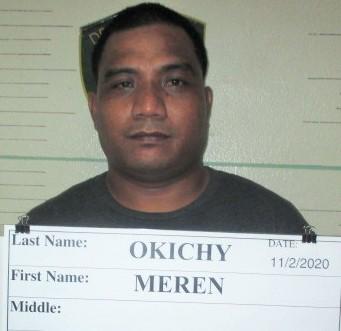 When police questioned Merem Okichy about why he assaulted his brother, he responded that he went to his brother’s Tamuning home to confront him about a post made by the victim’s wife on Facebook.

Okichy told police that his brother should have verbally disciplined his wife in accordance with their culture.

According to the complaint, Okichy had broken into the home and repeatedly punched his brother on November 2, just before midnight.

The victim told police, he heard banging on the door and went to secure it. But before he was able to, the door burst open and Okichy was in the doorway appearing to be angry and intoxicated.

An argument ensued and Okichy allegedly began punching the victim. This was corroborated by the victim’s wife.

Police noted swelling to the victim’s face, blood droplets where the assault occurred, and damage to the door.

Okichy is not a first-time offender. He has two prior offenses similar in nature.