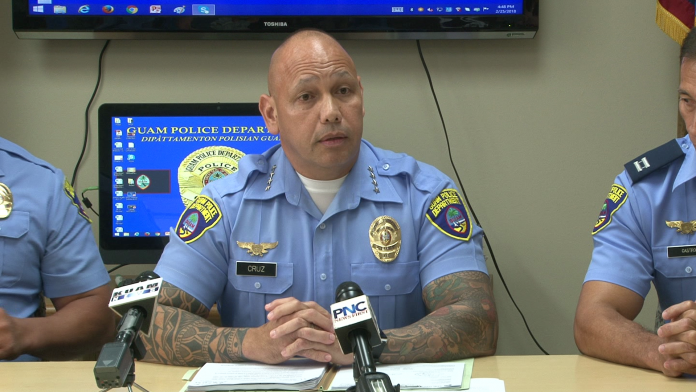 Guam – A Guam Police Department survey planned for election day will no longer be happening. Chief of Police J.I. Cruz says the department made the decision to cancel their plans following backlash from the community over its original decision to use uniformed police officers to administer the survey.

GPD had initially planned on conducting the survey in July but delayed it to September. The arrival of Typhoon Mangkhut further delayed the survey when one officer suggested that GPD take advantage of the elections to capitalize on the number of participants they could reach.

“Having it during election was a great idea by that captain. I’m gonna give them my superior rating on his next PR because that was one way of getting the Guam Police Department a report card for a large population of the island,” adds Maj. Manny Chong, Operations Bureau chief.

But there was a problem with that suggestion. The community wasn’t entirely on board with the idea.

Former Chief of Police Fred Bordallo and Public Safety Chair Sen. Telena Nelson raised concerns to the Guam Election Commission about the election survey and the usage of uniformed police officers to facilitate the study. Furthermore, questions were raised about compromising safety and security during the election, particularly at polling sites, if the force was to be used to survey the population instead of patrolling the streets.

The Guam Election Commission later rejected the idea, banning GPD from doing this survey inside of polling sites.

PNC: “So if it’s such a great idea then why not just continue to do it?”

“Because of the public outcry,” said Chong.

“I would tell you that, again, we think that it’s a great strategy. That’s what we think, that’s our perception, but what does the community really want?” added Cruz.

Chief Cruz says they will consult with the researcher to schedule the survey at a later time, possibly in January of next year. Other methods of administering the survey, like web-based or community outreach, will be discussed.

The 106-questionnaire survey will focus on feedback from the community about GPD’s performance as it relates to community oriented policing.

Meantime, Cruz addressed concerns about his potential conflict of interest in this study. The survey is made possible through a $56,000 GEDA grant and is being done in partnership with the University of South Pacific in Fiji where Chief Cruz is currently pursuing his PhD.

Cruz does not believe his studies at USP to be a conflict of interest in administering the survey.

PNC: “This survey will not be used to advance your thesis?”

“Absolutely not and I say that because we’re looking at maybe sometime in January at the earliest for the researcher to come back. I’m done collecting my data for my research,” answered Cruz. “As a matter of fact I’ll be done writing all my chapters by the end of the year.”

Chief Cruz says the survey will no longer be administered by police officers, whether off or on duty. They will instead use paid volunteers and work with organizations like the AmeriCorps or University of Guam students to pass out the survey.