Flore’s family, friends, Guam leaders, and representatives from the island’s military services gathered for a brief and somber ceremony at 2am at the Guam International Airport.

An honor guard of Guam Guardsmen received the flag draped coffin flown in from Dover Air Force Base where Cpl. Flores’ remains were formally turned over to his family during a “Dignified Transfer of Remains” ceremony on Saturday May 18th.

The 22 year old Flores and fellow Guam Guardsman 23 year old Sargent Eugene M. Aguon were killed in Kabuil Afghanistan May 16th when a suicide bomber rammed the convoy they were part of.  The explosion claimed 15 lives, 6 of them Americans, including Flores and Aguon. The other 4 Americans killed were civilian contractors. 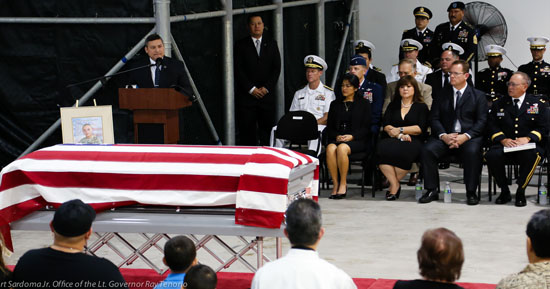 Until then, masses for Flores are being held nightly at 6pm at the Hagatna Cathedral, Rosaries follow at 6:30pm.

There has been no announcement when fellow fallen Guam solider Sgt. Aguon’s remain will return to Guam.