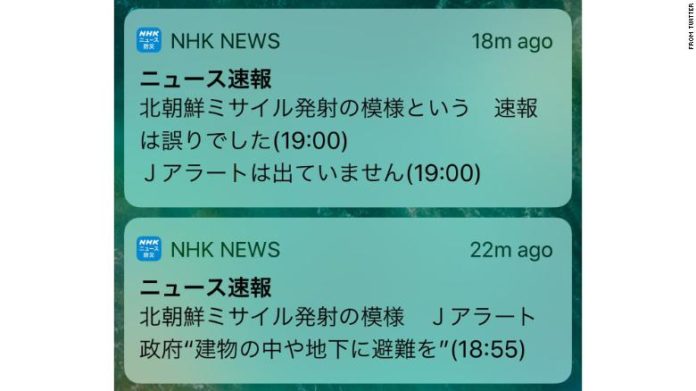 Tokyo – Just a few days after Hawaii received a false missile threat, another false alert was launched in one of North Korea’s known targets: Japan.

The alert was launched Tuesday by national broadcaster NHK, which sent the warning over its mobile device app. The message read “NHK news alert. North Korea likely to have launched missile. The government J alert: evacuate inside the building or underground.”

CNN reports NHK later apologized for the error, saying “the news alert sent earlier about NK missile was a mistake. No government J alert was issued.”

The blunder, which lasted for about 5 minutes, comes just three days after Hawaii’s government accidentally sent out an alert warning residents of an inbound missile, causing widespread panic throughout the islands.

The Hawaii government has since apologized and promised to improve its alert system.