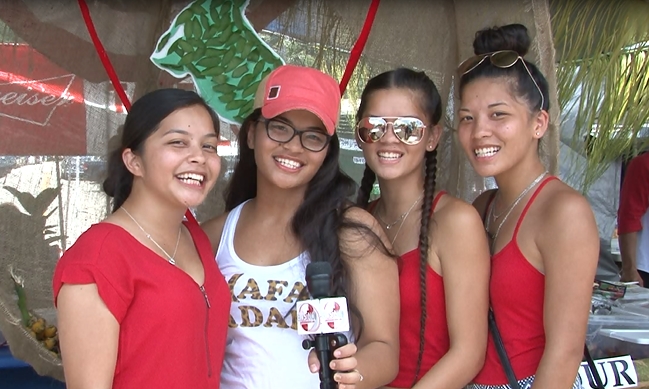 Most families make it a tradition to watch the Liberation Day parade every year…but some families take it to another level by joining the Sorensen Media Group’s Canopies on Parade.

Guam – Håtsa: I Rinueban i Taotao-Ta yan i Tano’-Ta! This is the theme for the 72nd Guam Liberation Festivities, which translates to: Håtsa: The Revitalization of our People and our Land.

So for this year, along the parade route in Hagatna, families and organizations decorate their canopies to represent the theme Håtsa and to participate in the Sorensen Media Group’s Canopies on Parade.
Canopies on Parade Judge Vanessa Malumay says, “They just get creative according to the theme which is Hatsa.”
Judge Hannah Laguana explains, “As a judge, I’m looking for the overall appearance, the creativity, and our theme Hatsa so the family or the canopy that went all out.”
We interviewed a couple of the Canopies on Parade participants. First, the Taijeron family canopy, where they brought the Håtsa logo to life.

Participant Kaelene Taijeron says, “Basically what we did is we took the logo of this theme. We actually brought it to life using different things around our house. If you look here, we put a flower on the most southern part of the island because that’s where we’re from Merizo. We just use fabric to put the globe together, my uncle made a latte stone out of coconut stump and that’s what we did.”

Kaelene says watching the Liberation Day Parade is a family tradition.
Next, we visited the canopy of Familian Tedtaotao, Castro and Cruz, where they had a storyboard of their family, a showcase of traditional Chamorro wear, and even a small farm.
Participant Amy Castro says, “Growing up in a ranch, we had lots of goats, deer hunting, fishing, farming, we all do it as a family. This is part of our culture and I’m very happy, very proud. A lot of hard work and we just want to showcase this to the community that we can survive of the land and the sea.”
Castro explains that starting with her grandparents, she’s happy that the culture has been passed on through generations. She says, “Basically it’s the perpetuation. It’s our fourth generation happy to get in there and fish, farm and help the grandparents. It’s pretty much alive and I’m happy. This is our storyboard Familian Tedtaotao. Just what we do as a family and continuing perpetuation so it ties in to the theme: our people, our land.”
Canopies on Parade Judges Vanessa and Hannah tell us what elements they saw on canopies they loved most.

“Where they do iconic symbols like the latte stone, Guam seal, and it’s just great to see,” says Vanessa.