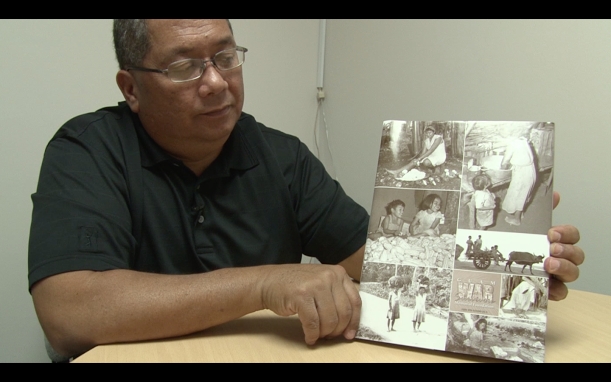 The official launch of the book is set for Wednesday the 20th.

Guam – How exactly did the people of Guam survive World War II and the Japanese occupation of the island? Senator Frank Blas Jr. and the Guam War Survivors’ Memorial Foundation is launching a new book detailing how War Survivors lived during WWII.

Families in The Face of Survival is a new book being released by the Guam War Survivors Memorial Foundation that helps paint the picture of exactly how the People of Guam were able to survive nearly three years of Japanese occupation during WWII. Senator Frank Blas Jr. explained saying, “It’s the second book published by the Guam War Survivors’ Memorial Foundation and what this book provides is new accounts and new iterations from individuals other than the original 30 survivors that we featured in our first book.”

This book features the stories of 15 war survivors. “The focus on this book was on how they survived. What did they eat? How did they sleep? How did they medicate themselves? What did they do to be able to survive day to day during the period of the occupation?” said Senator Blas.

Senator Blas says the book was made possible by volunteer writers and others in the community who wanted to honor and recognize Guam’s War Survivors. “What the book also highlights and what the book provides is the names of over 15 thousand individuals who were on Guam during the occupation and either survived it or met the unfortunate circumstance of being killed during the war,” Said Senator Blas.

Families in The Face of Survival not only teaches us about survival in the past but it also teaches about survival techniques that can be used in any day and age. “The many uses of coconut you know, how to fashion certain items around the house to make slippers, how to make a workable functional oven out of 55 gallon drums. It’s a lot of the stuff that if you read it and you go through what they needed to do to adapt and what they needed to do to survive and you sometimes when we go through some of our disasters storms and what not, you can actually glean from their experiences and what they had to use and actually use it today for practical uses. It was good 77 some years ago and it was still good today,” said Senator Blas.

Families in The Face of Survival is the second book in a trilogy of war stories based on the memories of survivors themselves. The book will be officially launched on Wednesday at 6pm in the Sheraton Laguna Resort’s Sirena Ballroom. You can buy the book there for $70 or you can get it at Frank Blas and Associates in Barrigada. You can call Frank Blas and Associates at 734-7702 or you can call the Senator’s office at 475-2527.