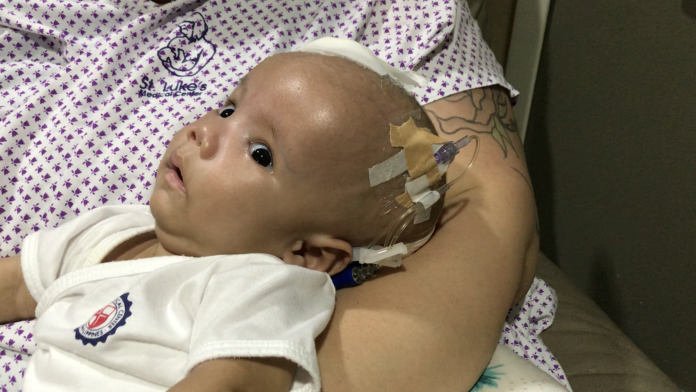 Manila, Philippines – A newborn baby and his family are in desperate need of help so they can come back home to Guam.

Baby Zaion Cruz was born with a host of neurological conditions that required him to be born in the Philippines so he could have a fighting chance at life. But now that he’s ready to go home, hefty medical bills may keep him and his family stranded in Manila, away from their loved ones here on Guam.

What should have been a blissful moment for Jennifer Lizama at five months pregnant to learn of her baby’s gender and overall condition, turned instead into a life changing moment. Jennifer and her husband Jacob would learn that their unborn baby’s brain was not developing normally. Doctors gave a grim prognosis for their baby.

“If he doesn’t get the proper treatment, there’s a possibility that he won’t make it,” Jennifer says, recalling the conversation she had with doctors. “As hard as it was we decided we had to fly out here to get that treatment for him to give him a chance at life,” she added.

In June this year and at seven months pregnant, Jennifer and Jacob traveled 1,600 miles to the bustling city of Manila, checked in at St. Luke’s Medical Center in Quezon City and have not checked out since. They essentially have been living at this hospital for the last five months.

“When I gave birth to him, they didn’t really expect so much from him,” Jennifer noted.

But then, as doctors would later describe, a miracle happened.

“He surprised everybody, he shocked everybody with his loud cry. His oxygen was where it’s–normal,” remembers Jennifer. “He came out just as normal–came out as a normal baby.”

This miracle gave doctors a better chance at planning their next steps for baby Zaion who was diagnosed with dandy walker malformation, hydrocephalus and schizencephaly.

At just six days old, he had his first surgery—a shunt was placed in his head to allow for drainage of built up fluid inside Baby Zaion’s brain. But that would not be his last surgery.

About three months and five more surgeries later, Baby Zaion is now ready to go home and meet the rest of his family, most especially the three little siblings who are eagerly waiting to meet their precious baby brother for the first time, 10-year-old Zaiden, 9-year-old Zyani and 3-year-old Zyleah.

“We have three kids back home,” Jennifer says as tears begin to fill her eyes. “They haven’t met their brother.”

“My heart is just in two places and I just, I’ve never been away from my kids at all,” added Jennifer.

As Jennifer and Jacob wait for precious Zaion to finally be discharged from the hospital he’s called home for the last three months, the family now faces another major hurdle: 1.6 million pesos in medical bills or roughly $31,000 U.S. dollars.

Jennifer says the staff at St. Luke’s has been amazing and Zaion’s NICU nurses have become like his second mothers. But after losing health insurance coverage because she’s been out of work for so long, Jennifer and Jacob are unable to afford their hefty medical bills. The hospital and Zaion’s doctors, in the meantime, have graciously agreed to allow the family to pay at least a portion or half of what they owe now so they can leave and pay the rest later.

Family and friends back home have held several fundraisers and they have received generous donations, some even from strangers, but with a bill so high, Baby Zaion still needs a lot of help.

“When it comes to that part, I’m very speechless. I don’t know what to do. Being here, not being able to do as much as I can do to raise the funds so that’s why I’m trying to reach out to share Baby Zaion’s story and just to help us in any way to bring Baby Zaion home,” says Jennifer.

While Baby Zaion’s future remains uncertain, his family can only hope and pray that he grows up to be a healthy and happy baby in the comfort of his family back home in Guam.

“He is one courageous little boy. He has never stopped–he fought every battle that he had alone and he always came out stronger,” Jennifer says of her beloved son.

If you would like to help Baby Zaion or donate to his family, you can contact Jamielyn Lizama 747-5029. You can also send donations to Jennifer’s PayPal account at paypal.me/jennlizama or through her email address at jenncruz2369@gmail.com