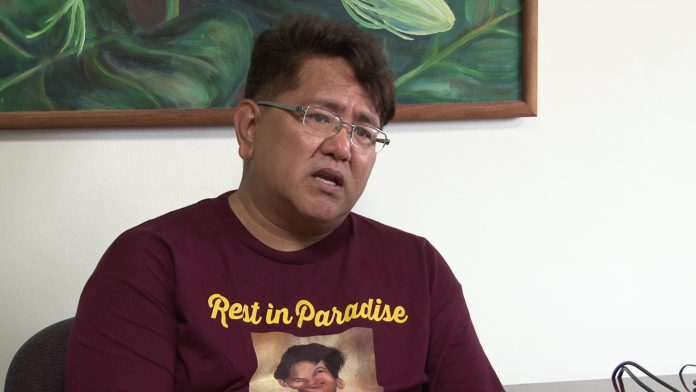 Guam – Xavier Akimas family said their final goodbyes on Saturday, but their grief is only intensified by questions about the search and rescue efforts. At the back of their minds the thought lingers, what if the search and rescue efforts were done differently? Would Xavier have been found sooner? Would he be alive? Or at the very least would they have been able to embrace him once last time before laying him to rest?

Xavier, 15, was among nine Father Duenas Memorial School high school students who went on a hike to San Carlos Falls on August 11. During their hike, heavy rains poured in causing a flash flood authorities believe swept Xavier away.

PNC sat down with Andrew Akima, the father of Xavier Akima, who shared with us his thoughts on the search and rescue efforts for his son.

PNC: “How do you feel about the search efforts taken to rescue your son, search for your son?”

“That is a really good question. I am very, very much disappointed. The first day when it happened I don’t know exactly how many people were out there looking for him. I heard the helicopter but at a certain time, I forget what time, that was when the helicopter had stopped. And it was just the personnel that was out there searching for my son,” explains Andrew.

According to Andrew, on the first night of the search he found out that personnel activated to search for his son in those first critical hours were minimal.

“That’s why I couldn’t sleep. I couldn’t wait till daylight just to see what I could do. And granted, it’s a place I had never been. As a father, I felt really helpless because I wish I had done this trek before so I would know exactly where to go to look for my son,” he says.

He was told that additional rescue personnel and the helicopters would show up the next morning to look for Xavier. At this point hopes were high that Xavier was clinging to life and waiting to be found. But by morning no helicopters were in sight and volunteers offering to fly drones over the area to cover more ground were prohibited from the search, according to Andrew.

“We responded to this case and all cases as we normally do per our standard operating procedure. [It’s] understandable, the family, when things don’t work out there is always going to be some anger, some questions and we understand that but I will tell you with everything that I am and all my integrity that we did the best we could, found every single available resource that we had and if resources weren’t there, they were being coordinate,” assured San Nicolas.

“Another downfall GFD had was individuals under the camp that was sitting there playing their [phones], fiddling with their phones and I would ask for updates and would be redirected, ‘Oh, you have to ask this individual.’ And I look at them. What are you here for? If you don’t allow us to go out there and look for my son then what are you here for?” Akima questions.

Xavier’s father says it appeared there was no sense of urgency in the search for his son and it was instead as though the government was searching for a missing family pet, not a human being.

“So of course when I didn’t see any activity that morning I was drawn to look for my son as any father would. So a couple of my family members followed. Of course we were briefed that if anything happens in terms of anyone of us getting hurt, it would compromise my son’s rescue efforts,” he says.

Suspecting that there wasn’t many rescue personnel searching for his son, Andrew was torn but didn’t hold it against his family members who had to turn back. Well into the search on the second day, he once again found out that the search would have to continue the next morning. As Andrew made his way back to the second command post he dropped to his knees begging for his son’s forgiveness and apologizing that his son’s last name was Akima.

“I told him I wish I knew where I am going. I asked him to direct me to where I was going. So when I got to the first post I was so distraught I started yelling that I am sorry that my son’s last name was Akima but he really means a lot to me,” Andrew shares, holding back tears. “I was yelling, ‘Where is the choppers, where is the choppers that you guys promised and the people that you guys said was going to be here?'”

For two days the search and rescue efforts were concentrated on the same area, baffling Andrew who knew that common sense would indicate if Xavier was carried away by a flash flood then he would be further downstream. But his pleas for the search to be done further downstream were ignored, according to Andrew.

On the final day of searching, the choppers returned. More personnel and volunteers were able to join in on the search. Xavier’s father, however, can’t help but question why the government waited until that final day. And he is left again to wonder, if the same amount of people who came out on the last day had been there from the beginning, would his son have been found alive?

It was on this day that GFD reported that they had located the Xavier’s bag near the bridge leading to Leo Palace Resort. From there, authorities concentrated their search efforts and found Akima’s body hours later, one and a half miles inland from Pago Bay on the Lon Fit river.

But surprisingly, while GFD took credit for the discoveries, Akima says it isn’t GFD the family wants to thank but the two volunteers who made the discoveries.

“The sad thing–yes, I am happy that they found him. The first thing that they brought was his bag so we were hopeful. We said wow maybe he is out there clinging and of course we were told that he was not he wasn’t alive,” said Andrew.

His body was exposed to the elements and the decomposition process had already begun.

“I think it would have brought us a little more closure and I come here to do his family viewing and all I see is his casket. Yes, I know that it’s my son but we all feel that we were still robbed,” says Andrew.

The Governor’s Office sent PNC a search briefing late this afternoon indicating the number of sources utilized in this search and rescue effort. We will be reviewing this brief and will report on it at a later time.