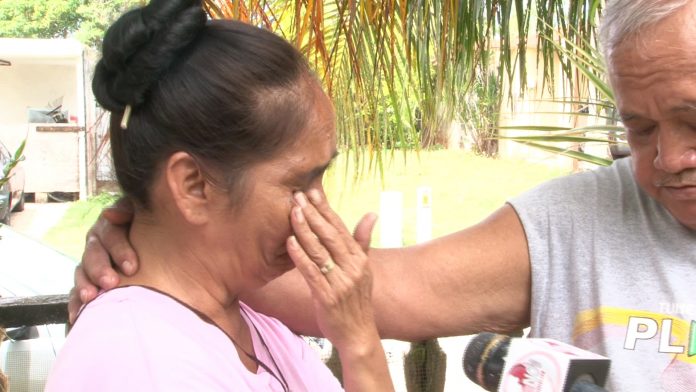 Ike and Frances Chargualaf are having a hard time paying for their son’s funeral services. Their son, Felipe Reyes, was murdered last month.

Guam – It has been almost two weeks since their son, Felipe Reyes, was murdered, but Ike and Frances Chargualaf say they are still in shock with their son’s death. In fact, the couple is finding it difficult to pay for their son’s funeral services.

“I miss my son. I miss him so much,” says Frances before breaking down into tears.

It’s a pain no parent should ever have to feel, laying your son to rest. To add to that pain, the Chargualafs, at one point, didn’t know whether they could even have the proper funeral services for Felipe Reyes, who was murdered on February 17.

Police say Reyes was fatally stabbed by Fred Isi John during a drunken fight. But Ike and Frances Chargualaf say it wasn’t the first time John had threatened their son. The two were living in the same compound in Machanao, Dededo.

The total cost for their son’s funeral services is over $4,000 and for Ike and Frances, it’s an amount they can’t afford. So they went to GovGuam agencies for some help, first to the Department of Revenue and Taxation, then to the Governor’s Office, but they were told that because of the enforcement of the laws, they are not allowed to pay out tax refunds ahead of time for emergency purposes.

It was through the help of the community, Ike’s employer and many friends and family, that they were able to come up with, at first, $1,600, which is $600 short of the $2,200 they needed to pay for Reyes’ cremation.

The family went through with the funeral as planned, still unsure at the time whether they would be able to proceed with the cremation. Through the generous donations of those who attended the funeral that they were able to come up with just the right amount, $615, to have their son cremated.

“I was very surprised, very surprised. I was overwhelmed. I even cried because of the show of people. It was beautiful,” Ike said.

The family still owes the San Agustin Funeral home over $2,000, but they say they are grateful to them for allowing them to cremate their son even though they weren’t able to pay for the entire service.