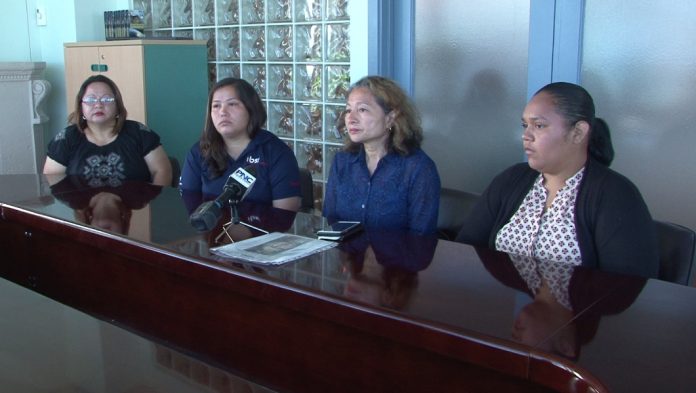 “Even if she is with someone, or if someone is assisting her, if they can just call out and say ‘she’s okay’ or ‘she’s with me’ –no one’s in trouble, we just wanna know where she’s at or how she’s doing,” shared Lani Castro.

Guam – Yesterday, family members of missing teen Deondra Borja found footwear reportedly belonging to the 18 year old JP Torres student. The family says the new discovery could mean that the missing teen is still out there.

It’s been a few days since 18 year old Deondra Borja has been reported missing, which poses as a grave risk to the teen who requires medication for her depression.

“Every day that she’s not taking her medication puts her at risk, so it’s very important for her to take her daily medication,” shared Frances Roberto, Deondra’s Godmother and Aunt.

Roberto said this is the first time Borja has ever disappeared, calling it very unusual behavior for someone with her personality.

“With her depression and possible bipolar condition, Deondra struggles with that every day. She is on medication for it. We’re almost sure that her depression had a lot to do with her disappearance,” she explained.

Borja who is described as 5 foot 2, weighing 200 pounds, with long black hair went missing around 5pm last Wednesday. She was last seen walking a relative’s dog near their Pagat residence.

Deondra’s Aunt, Lorraine spoke with Borja just a week prior to her disappearance, and said her niece seemed fine.

“We talked, she seemed okay. I didn’t get any signs or hints from her of anything,” shared Lorraine.

Last Thursday, rescue units searched the Pagat area, the Thousand Steps cliff-line, and the surrounding waters to –no avail. But yesterday, something turned up. Family members found shoes belonging to Borja and the search continued.

“We are definitely more hopeful finding her footwear, but at the same time we’re still also very confused as to why she would be all the way down there. But yes, more hopeful definitely,” expressed Lani Castro, Deondra’s first cousin.

With the new discovery, this could mean there are a few possibilities as to the whereabouts of the missing teen.

“Even if she is with someone, or if someone is assisting her, if they can just call out and say ‘she’s ok’ or ‘she’s with me’ –no one’s in trouble, we just wanna know where she’s at or how she’s doing,” shared Lani Castro.

The family members have already received calls from individuals who believe they’ve spotted Borja. In fact, Roberto shared that someone contacted them just this morning saying they saw a young woman matching the same description of Deondra Borja not too far from her last appearance.

“Someone did call in and said they saw someone who matched her description at GPA’s Fadian Headquarters in Mangilao, which is very close to the area she was last seen. And she lives with her grandparents in the Pagat area so that’s just down the road from there,” remarked a hopeful Roberto.

But still, nothing is confirmed. And until then, the family says they will be posting fliers all over major offices on island.

“We just need to get the word out…We also wanted to say thank you to all the helpers, and the family, and friends, and GPD, and the GFD, for trying their best to help search for her,” expressed the family.

To help aide the family with flier posting you can reach the family at 688-6331 or reach out to the family members on Facebook.

Anyone with information regarding the missing teen can contact the Guam Police Department at 472-8911 or Guam Crimestoppers at 477-HELP.